What Will Harry Potter Wizards Unite Be About

Do you remember the worldwide phenomenon that was Pokémon GO? Well, get ready for another one with Niantic’s AR Harry Potter game Harry Potter: Wizards Unite. I know you must have a lot of questions and we’re here to report to you everything that we’ve found out.

First of all, this goes without saying but Harry Potter: Wizards Unite will be a mobile game for iOS and Android. There’s no confirmed release date right now but Niantic says that it will be released sometime this year. If we’re placing any bets I’m going with July 2019 – just in time for the muggle children’s summer holidays and Harry Potter’s birthday.

So while you’re waiting for your letter to arrive you can enlist through the game’s official website. Simply fill in your date of birth and email address, and the Ministry promises to keep you updated on the “unfolding calamity”. Now let’s get into the features.

Set in the present day, Wizards Unite sees the Wizarding World facing an existential crisis which is threatening to explore the magical world to muggles. This “calamity” sees beasts, people and artefacts from the Wizarding World being scattered across the world and it’s up to players to contain it.

The Ministry of Magic is calling for all wizards to join a task force in an effort to locate these magical items. Their job is to dispel the confounding magic surrounding them and return the foundables before the muggles catch sight.

We haven’t been told the exact nature of this calamity, and that’s purposely done. Niantic’s aim is for players to gradually pick up pieces of the story as they progress. However JK Rowling isn’t involved with Wizards Unite’s story, so how canon the plot is, is arguable.

“Please resist the urge to panic. Traces of magic are appearing across the Muggle world without warning and in a rather chaotic manner. We worry it is only a matter of time before even the most incurious Muggles catch wind of it. We call on all witches and wizards to help contain the Calamity or risk the worst of times since You Know Who. Brush up on your spells, get your wand ready, and enlist immediately.”

Wizards among us will be happy to know that their Ministry of Magic ID will be created taking a selfie. You can then customize the picture through AR: adding hats, wigs, glasses etc. You can later choose your specific Hogwarts house and wand for that extra personal feel.

Wizards Unite lets you choose from three professions: Auror, Magizoologist and Professor. As you gain experience and gain items, you can invest in the progress of your chosen field. Each of these professions has its own strengths and weaknesses when it comes to battle. ]

At present, it doesn’t seem to have a huge impact. Fortunately, if you change your mind about your profession, you can change your choice at no cost, while keeping the progress you made in that profession.

In order to obtain these foundables you’ll need to ‘battle for it’. While adventuring you’ll come across beasties and wizards in the world that are protecting the foundable items.

It’s your job to dispel the confounding magic being used on the foundable so you can return it. Either that or defeat the witch or wizard that’s causing you grief. Combat and dispelling is done by tracing the spell symbol shown on your screen, swiping and defending. Your success is based on the accuracy and speed of your trace (and luck). Before you begin the battle you can assess the threat level of your enemy to decide if it’s worth the risk.

The aforementioned foundables can be put in place here. Each time you dispel a confoundable you obtain a fragment of the item or creature you returned. When you have collected all the fragments, you get a lovely sticker to pop in the registry.

For example, after saving Hagrid from a sticky situation, you’ll obtain a sticker fragment for him. Buckbeak required nine in total – so he needs to be saved nine times in total. These stickers are categorized in specific families which each have their own experience. For example, Hagrid and Buckbeak are part of Magical Creatures, while Professor McGonagall would be part of the Hogwarts collection.

Once you’ve collected a sticker or completed a collection, you are awarded a treasure trunk full of items.

This discombobulated Niffler, hoarding gold, Galleon-like coins was just spotted at an arcade in England. As the Calamity threat increases in severity, make sure to join the Statute of Secrecy Task Force and be ready to help: www.wizardsunite.com

Much like Pokémon Go’s raids, Fortresses are battles which offer more powerful items but required you to team up with others. At present, you can take on a Fortress with up to four others (making a total of five). However, to take part in these you need to use rune stones (which you obtain from the aforementioned treasure chests).

However, unlike Pokémon Go raids, there are extra layers to Wizards Unite fortresses. The first is that Fortresses have 10 levels, as you beat each one you progress to the next, more challenging, level. 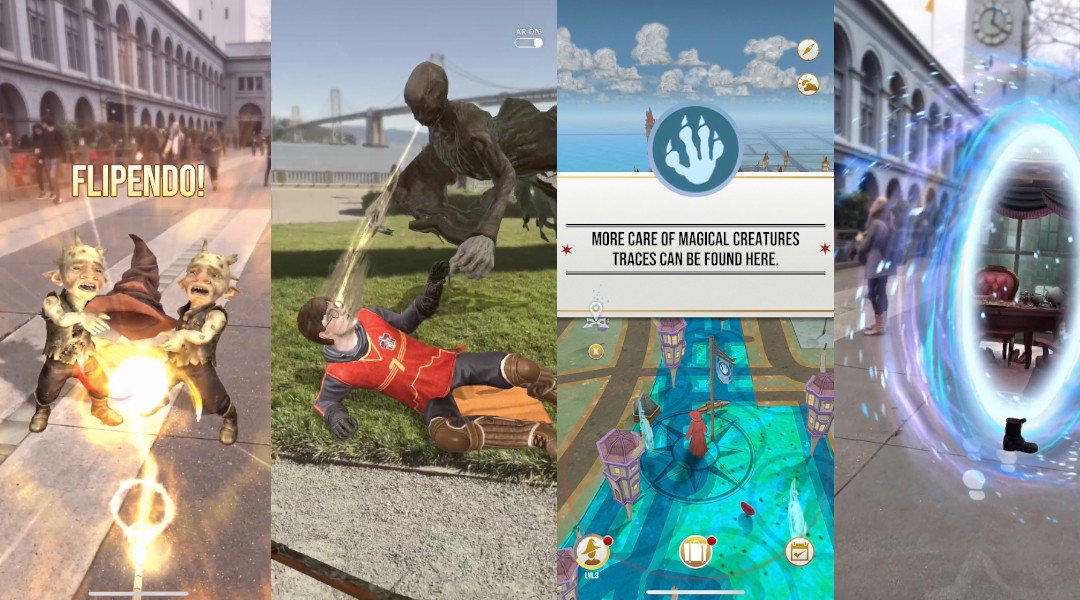 After Fortresses are landmark events. Basically battles that feed into the game’s main story. For fans out there you’ll be revisiting classic events from the Wizarding World franchise – such as saving a Quidditch-clad Harry from a fatal Dementor’s Kiss.

All victorious battles reward you with experience, contributing to your overall level. Landmark events are the key ones to keep an eye out for. According to Niantic, there will be over 100 AR events at launch.

Niantic’s real-world platform means Wizard’s Unite map is rendered much like Pokémon Go’s. However, despite being built on the same AR software, the similarities become more distinct as you play.

The Wizards Unite world is a living and breathing map, complete with owls swooping overhead, spell remnants from other players and ingredients to scoop up on your journey. This dynamic map means that a variety of aspects influence the creatures, events and ingredients you come across – including moon phase, weather and time. 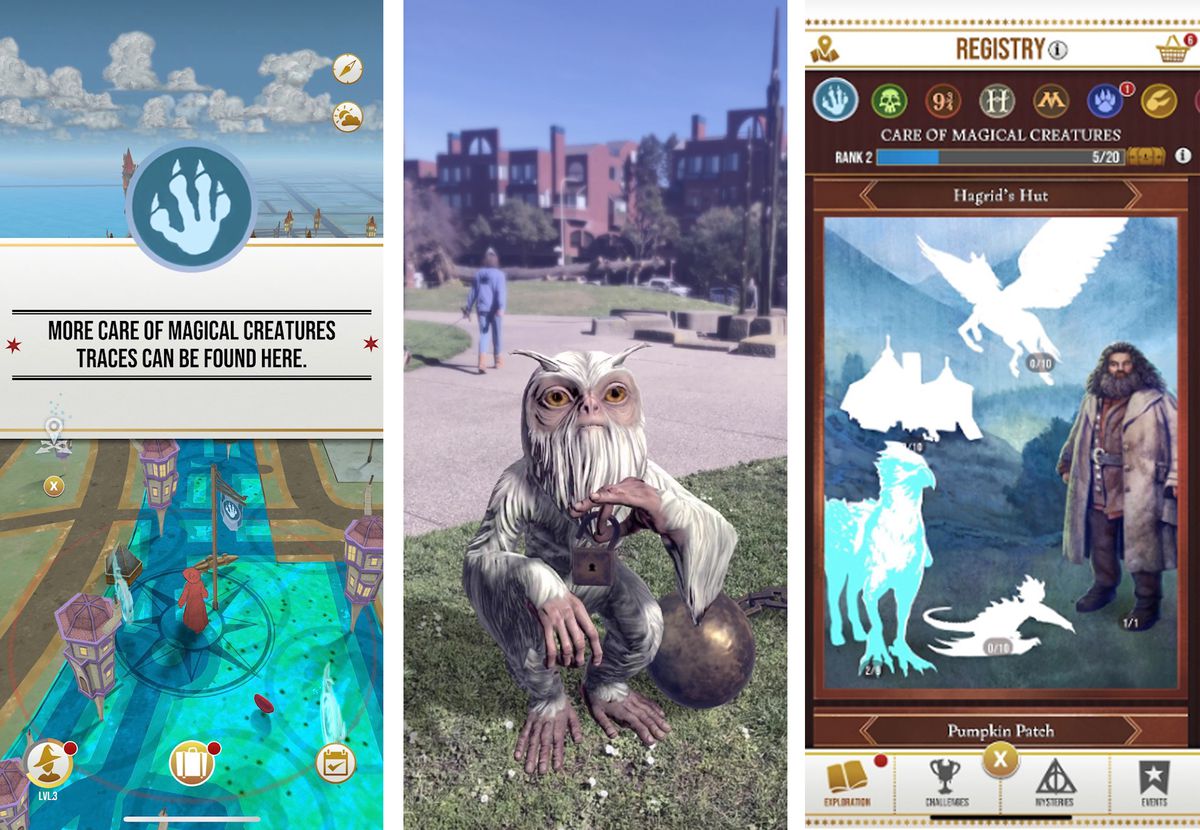 On the map you’ll find a couple of important landmarks. One of them will be Inns and the other Greenhouses. Inns ‘serve’ a variety of cuisine, with each plate giving you more spell energy to use for combat. You’re presented with several covered serving dishes and asked to pick one at random. With each dish giving varying amounts of energy.

It’s down to luck of the draw and you have to wait another five minutes before you can pick another – but don’t worry, the world is littered with inns to gather energy from.

Alongside inns, the other notable buildings dotted across the map are greenhouses. Greenhouses reward you with ingredients, used for potion brewing. But much like inns what you get is the luck of the draw.

You are presented with five plants and asked to pull up one to reveal your ingredient prize. Again waiting five minutes before you can pick again. These ingredients are then used for potion brewing necessities such as health potions (there will be 10 potions available at launch). You’ll need to upgrade certain potion-making skills in order to improve brewing time, yield and quantity.

Yes, you will be able to pay real-world money for spell energy and other items, but Niantic insists this doesn’t affect progression and merely reduces waiting time.