Holy Potatoes! A Spy Story?! Is A Chip Of The Old Spud

It’s been four years since Daylight Studios began their spudtastic potato journey! You might wonder how many potato puns a spud can make? Well three games worth apparently, since then we’ve played Holy Potatoes! A Weapon Shop?!, What the Hell?! and We’re in Space. Not it’s time to add another potato to the sack game with Holy Potatoes! A Spy Story?!

If you’re a fan of Daylight’s previous time management games, you’re going to like A Spy Story?! In this segment of the potato universe, you play as tater twins Ren and Rexa. Together they run a spy agency that trains spies and plans out top-secret missions. The twins are set to solve all the mysteries across the globe but there’s one that they need to solve closer to home. Uncovering the truth behind their parents’ disappearance. It’s a hard thing to watch when a good potato goes bad.

In order to complete your missions, you’re going to need to train up some A-grade spuds. Your elite spy task force will compromises of four classes: Thief, Fighter, Charmer and Analyst. The classes are pretty important to focus on early on, but later you’ll be relying on their skills and equipment. Each spy has four stats for you to improve: Fight, Trick, Avoid, Charm and a Special Skill. Later on, you’ll be able to go all Q and equip your agents with gadgets to help them accomplish their mission.

Some missions will require specific classes to infiltrate them so make sure to spread out your spies. Remember to level up their skills broadly, nobody likes a one lump mash. Continue on and you’ll be rewarded with two ultimate classes: Trickster or Superspy. Taking it to the next level, you’ll then be able to splice two characters together to create new GMO spies.

I know they’re potatoes but they’re also kind of your employees? That doesn’t seem right. 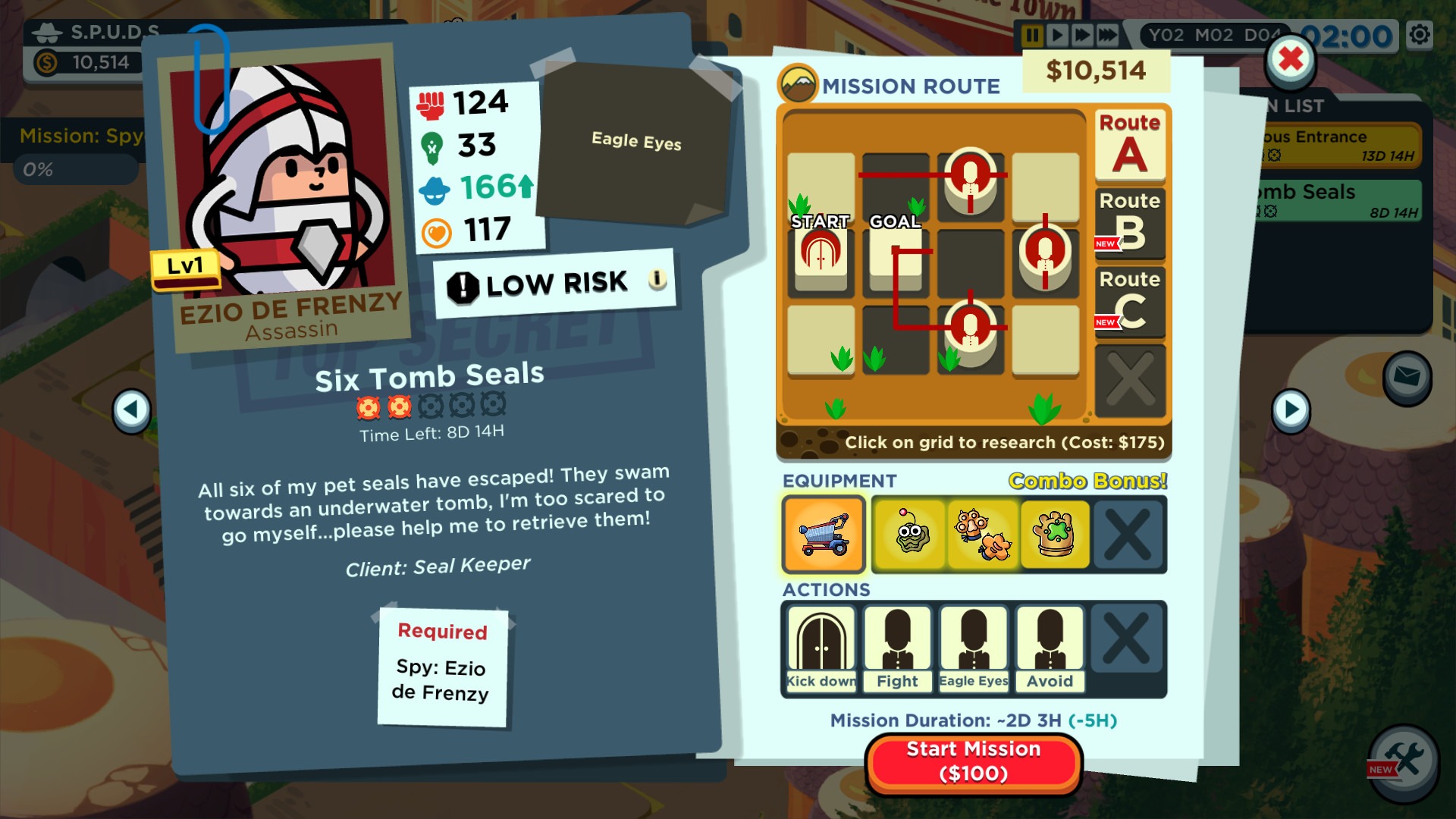 So overall it sounds like A Spy Story?! is extremely similar to the previous Holy Potatoes! games. But have no fear gumshoe A Spy Story?! is mixing it up with town building! My secret favourite mechanic in all JRPGs. If it worked for Ni No Kuni 2 and Dark Cloud 2 it’ll definitely work here. Each building in your town attributes to certain benefits in the game. Be it decrypting super secret discs, designing new spy gear or improving spy traits. You’ll need to plan your town carefully as each of the buildings will actually need a road (gasp) for the potatoes to walk along. Keep spending that starch as having certain buildings and decorations will give your agency a boost as well. 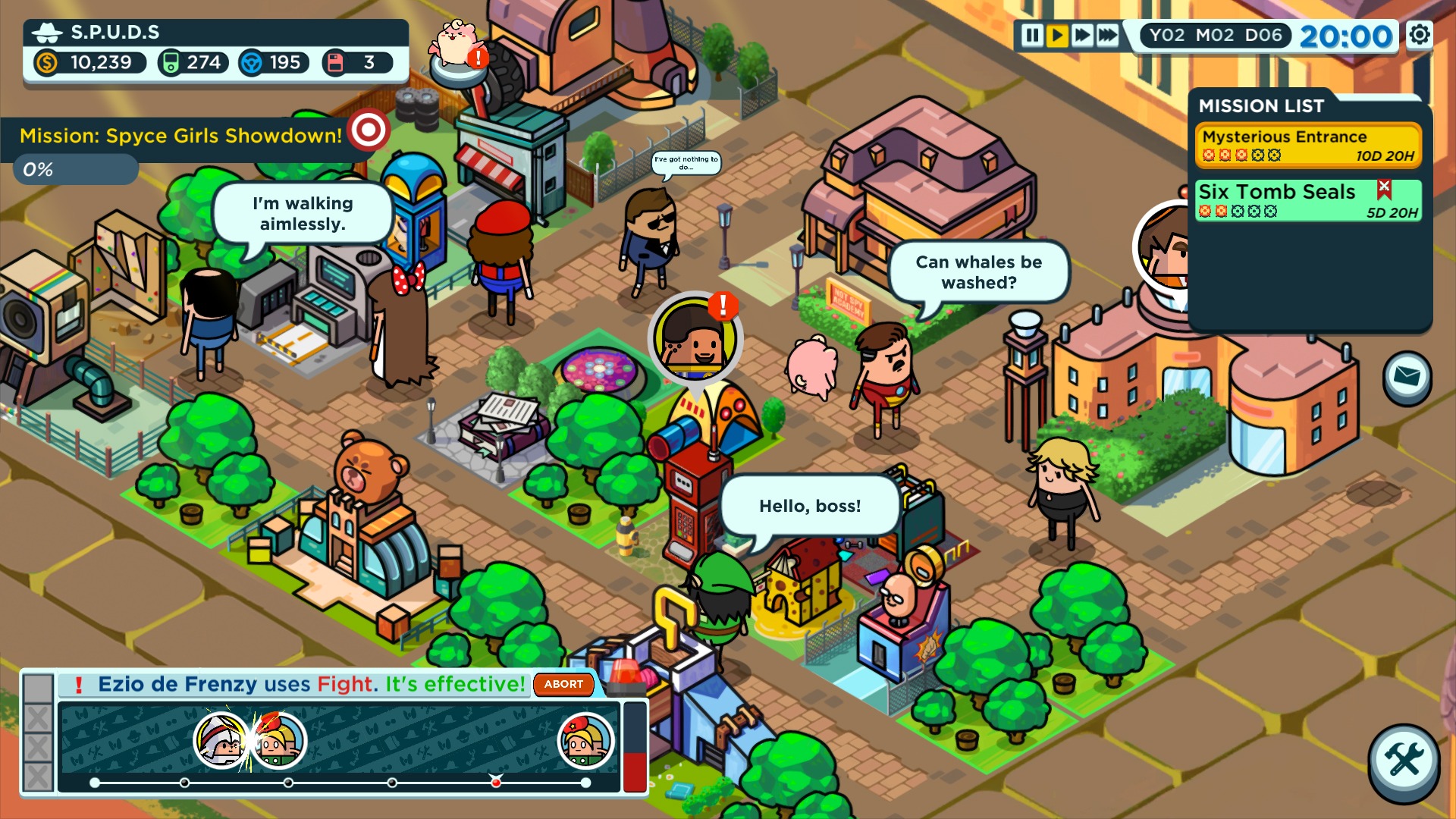 While managing the growth of your spud spies you’ll have main missions and side missions to attend to. Every mission has a different time limit, requirements and stages. So keep an eye on your main mission countdown timer while you’re doing side quests or grinding characters. Not completing the main mission in time will result in game failure.

Each mission comes with a brief, requirements, mission routes, equipment and actions list. Some missions have multiple routes, each with different actions that can be taken to complete them. This is where paying attention to how you’ve raised your spies comes into play, as every route could be carried out by a different spy. Some class specific missions could also throw you for a spin—like requiring a fighter to have high intelligence or evasion skills. So you may not want to stack one trait per class.

There are also Special Missions which can only be carried out by specific spies or Ren and Rexa. These are played out in a VS platformer. You’re actually required to take a more active role in the VS battles which ends up being kind of fun.

Holy Potatoes! A Spy Story?! is another solid release from the team over at Daylight Studios in Singapore. The game is available on the Steam Store as well as on the App Store! A Spy Story?! will be released on iOS on the 28th of March, but you’re able to pre-order the game now!