Assassin’s Creed Odyssey? Not quite yet, Ubisoft is pumping up the game with ongoing extra content to keep players busy and coming back. This is everything that’s coming to the game in January. For additional information check out their updates on the Ubisoft blog post.

The second DLC Shadow Heritage will be arriving this month on January 15th. Shadow Heritage continues the story arc from the first episode, Hunted in the Legacy of the First Blade. In this new expansion, players will “investigate a blockade initiated by the Order of the Ancients around the port city in Achaia.

You’ll discover a group of stranded citizens whose lives are being threatened by a fierce naval commander, the Tempest, who is in charge of the blockade. Steal the Tempest’s top secret weapon, help the citizens escape, and destroy the blockade once and for all…with your ship! An epic maritime battle awaits you at the Aegean Sea.

To play Shadow Heritage, you need to finish the first episode, Hunted, complete the Naxos questline from chapter 7 of the main story, and hit level 28 or higher. 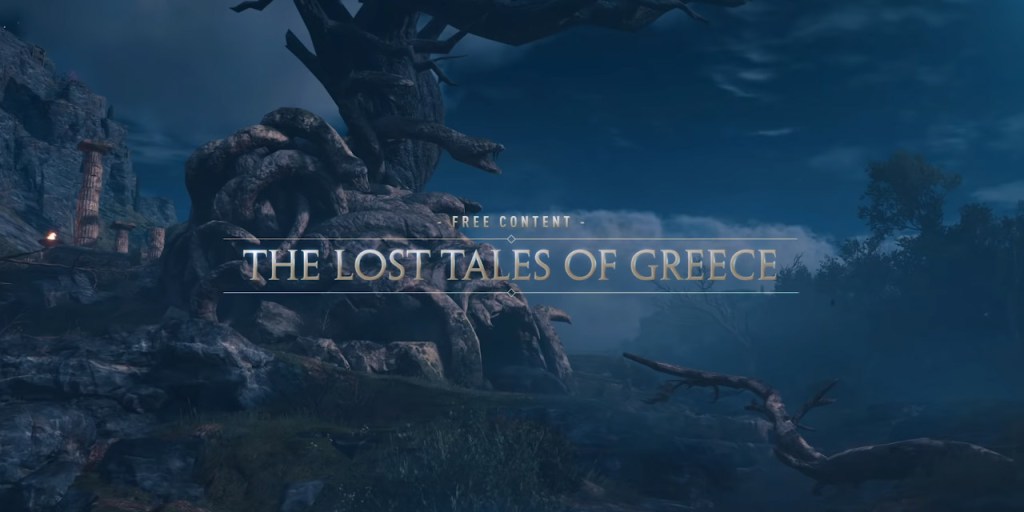 The Legacy of the First Blade DLC is paid, but Odyssey’s Lost Tales of Greece DLC is free, and it continues in January with the Daughters of Lalaia expansion. In the Daughters of Lalai content, you’ll travel to a village left defenceless after all the men left for battle. Players will train the townspeople to prepare them for “incoming danger.”

To get started, travel to the Phokis Region after reaching Chapter 5 of the main story path. The first quest is called A Gathering Storm, and Ubisoft recommends that you are at least level 13.

The other new Lost Tales of Greece content is called Poet’s Legacy, and it introduces players to Greece’s “most scandalous poet.” During this questline, you’ll learn that she isn’t quite what she seems as you become increasingly involved in her risqué performances”. Oooo.

To get started, reach Chapter 5 of the main story and make your way to the Boetia region. The first quest is called Praxilla’s Admirer and we recommend that you’re at least level 34. 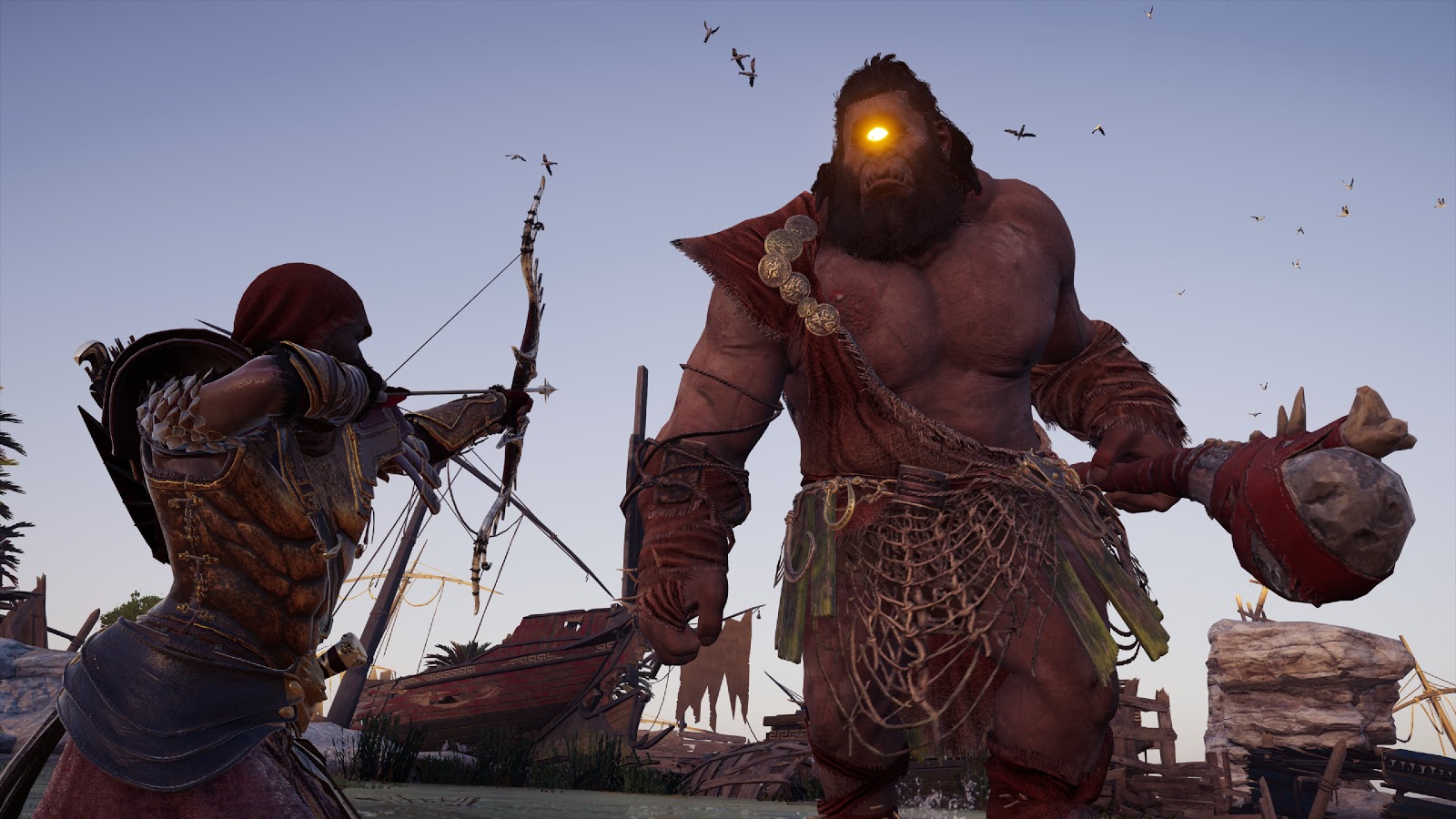 Additionally, Odyssey is adding a new mythical creature, the legendary Cyclops Arges. Players who defeat the beast will get his weapon, the Hammer of Hephaistos. You can find the ‘Bright One’ on a Volcanic Island in Arges. This is an endgame challenge, so Ubisoft recommends that you’re at least level 50 before facing off. 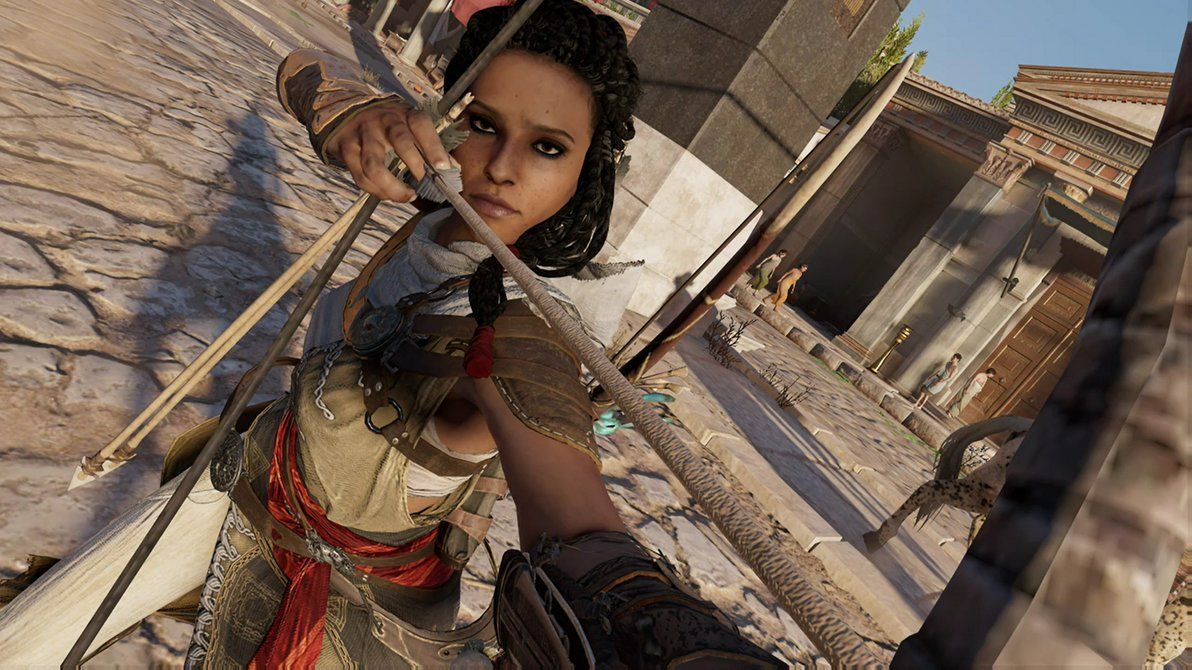 Additionally, Ubisoft Club members can bring Aya from Assassin’s Creed Origins to their ship in January, while a bunch of new items are coming to the game as well. The Dionysos Character Pack adds a new gear set, a big cow mount, and a “legendary dagger.” The Athena Pack is also on the way, and it adds some snazzy new gear; you can see it in the image embedded above.

Finally, Ubisoft is addressing enemy scaling. With the new title update on January 10, players can select an enemy-scaling system that suits their playstyle. If you haven’t noticed how the scaling works look at every region on Odyssey’s map. They all have two numbers associated with it. Those numbers indicate, in part, how levelled up you need to be to explore the region without getting thrashed.

If you’re in a region and start levelling up, the quests in that region will level up with you. Enter a level six zone at character-level six and then improve to seven, and any level six quests you grabbed in that region become level seven quests, complete with tougher enemies. If you hit the max level for the region and playing at normal difficulty, then quests will keep levelling but will lag some and eventually stay two levels behind your character, no matter how high you go.

As part of Odyssey’s January update, an option is being added to the menu to mess with how the game handles scaling. Players will be able to leave things as they are, lock all enemies to your level, allow them to drop two levels under you or go super easy and let them go four levels under you.

In addition to all the new content, Ubisoft said it continues to work on more title updates for Odyssey that add new features. One of these is new Mercenary tiers–two more are coming to the game, and they should be extra challenging. Defeat them and you’ll earn “new benefits worthy of a demigod,” Ubisoft says. Additionally, a new vendor is coming to Odyssey that will allow players to view and purchase new engravings, upgrade them, and also perform the engravings themselves on gear you already own. The new shop, Hephaistos’s Workshop, is located int he Myson Cave in the Malis region.

If you want to watch the video you can check it out here.