Two Point Hospital Is Just What The Doctor Ordered

We were pretty excited when we heard that the original creators of Theme Hospital – Gary Carr and Mark Webley were releasing a spiritual successor to the zany 1990s hit. Released on PC and Mac last week, Two Point Hospital isn’t just a modern day remake of Theme Hospital but instead builds on what made the original sim great.

Twenty years ago, Bullfrog put out a little pseudo-simulation game called Theme Hospital. It wasn’t a game about curing cancer or stopping an influenza epidemic, instead, it took the dreariness of modern-day healthcare management and made it fun! Your doctors had to figure out how to deflate giant heads, most likely by sticking a giant needle into it or to snip off a part of an abnormally large tongue. All while hiring doctors and staff, making sure there were enough clinics and winning a couple of awards here and there. 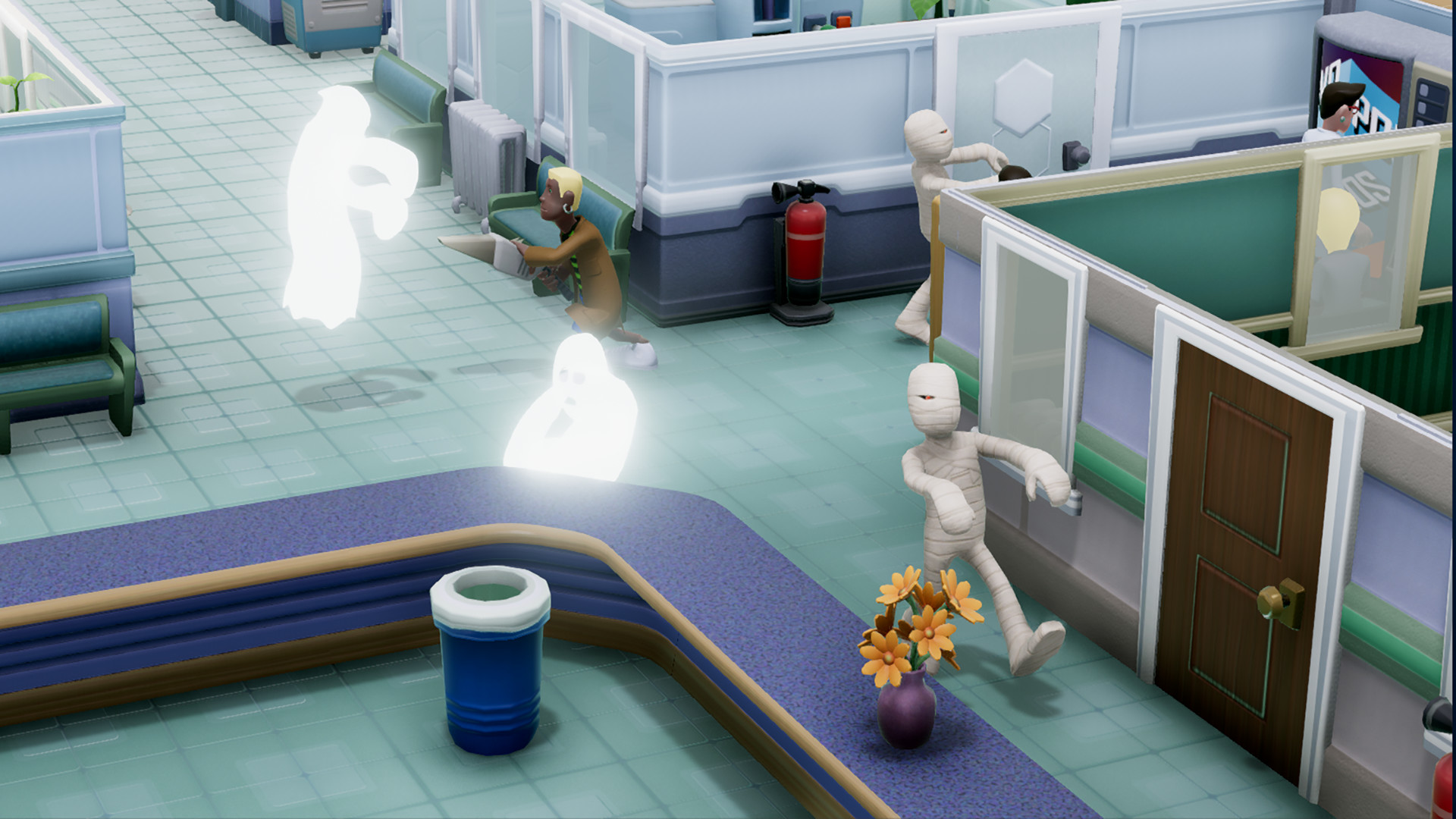 The game gets a bit hectic for sure as you start building your healthcare empire and managing multiple hospitals. That’s right I said multiple. Two Point Hospital takes place entirely within the expansive Two Point County, a county so large that it has several biomes. You start off as an administrator for a small, one-building clinic in the suburbs while soon you’re laying out enormous, eight-building facilities in esteemed castle-like universities.

Players will eventually find themselves in charge of a whole network of healthcare facilities, each with its own unique needs and quirks. This is where the biomes come in. Some will be located in cold, mountainous foothills catering to accident-prone skiers. Others will be located in Two Point County’s balmy southern regions, where having a boatload of A/C units is just as important as having enough diagnosis rooms. Still, others will be located in major city centres, where foot-traffic is plentiful and crises are common. This changes up the strategy that you have to take care of multiple hospitals. 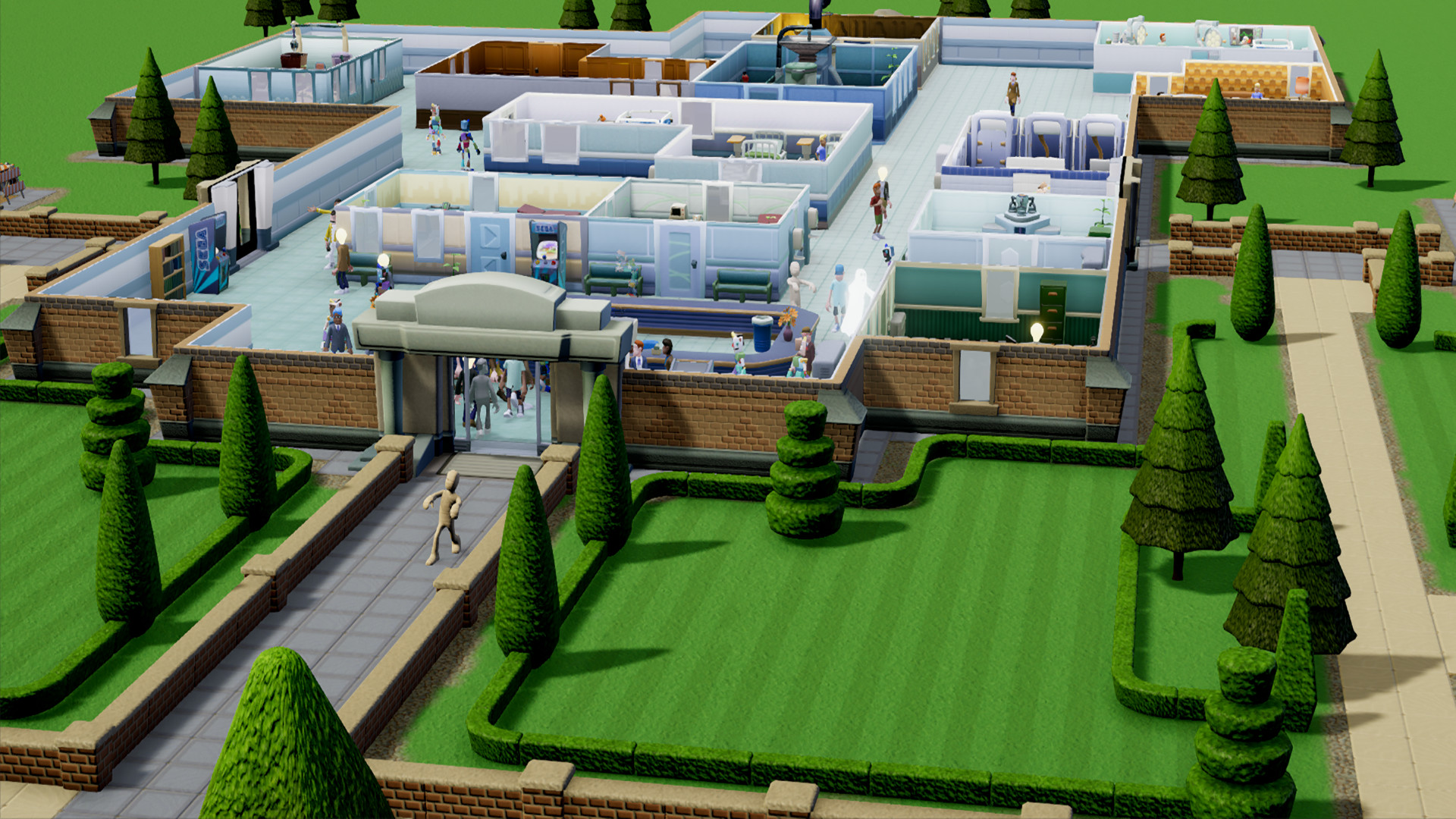 Progression in Two Point Hospital is tied to each hospital’s star ratings. Getting one star is easy enough for the most part. All one has to do is fulfil a stage’s initial set of goals. Once that’s done, the next hospital opens up and the player is allowed to advance. Each level introduces new ideas and constraints. Early on that’s usually a disease or group of diseases, i.e. “All the maladies you can cure by building a Ward.” Sometimes it’s more advanced treatment facilities, like the Colourizer for Grey Anatomy. These rooms cost more, require more staff, and take up a lot of space.

A new hospital usually means new high-level mechanics, like research labs or staff training facilities, or even environmental concerns. Snowbound hospitals demand radiators for instance, or both patients and staff will freeze.

Playing Two Point Hospital can be broken up into two sections: building and managing. Each stage is kicked-off by building the initial set of rooms every hospital needs and then continually adding and improving them based on the hospital’s needs. Building a room is as simple as choosing it from the menu and then clicking and dragging in the space the player wants it to occupy.

Secondly is management, click on the “hire” menu to begin. Each room specifies what type of staffing it needs and each potential staff member has their own set of strengths and weaknesses for the player to consider. If you’re only going for a single star on each of their hospitals, then these skills won’t matter too much aside from a couple of essentials. Those looking to move beyond that first star, however, would do well to carefully consider whether the skills and personalities of their staff will be suited for the position they’re being considered for.

Most of the time I feel a little cheated having to move off after having built a fantastic hospital. I don’t want to have to start from scratch again! It’s mostly a small complaint and I’m enjoying my time in hospital management. 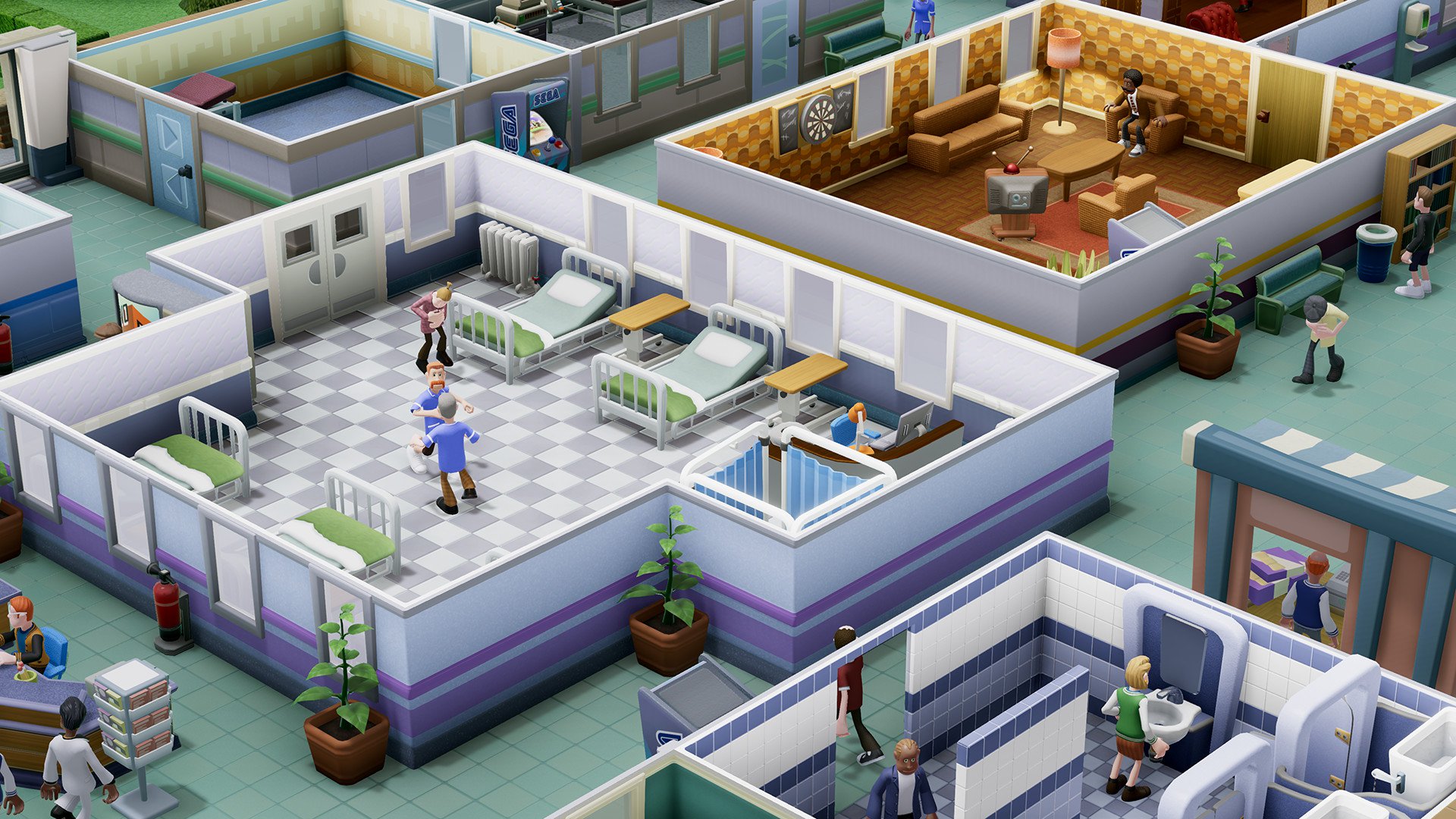 Two Point Hospital is a consistently hilarious game that rewards observation—pausing your relentless building efforts to take a look at your patients, or just appreciate the silliness of its procedurally generated names. Its a delightfully lighthearted game with a seriously impressive UI so much so that we at Unpause can say for certain that Two Point Studios haven’t just honoured their roots, but surpassed it.

Two Point Hospital is available on Steam for Mac and PC for USD$31.49 or RM90