What’s Changed In No Man’s Sky Since Next

Space the final frontier. Ever since mankind has been able to see the stars, we’ve been obsessed with exploring it. Any science fiction fan knows the opening monologue of Star Trek and the promise that it gave of infinite discovery and exploration of the unknown. That was the dream and it was No Man’s Sky that was set to deliver on that dream.

Created by independent game developer Hello Games, No Man’s Sky was launched with the promise of a deep space exploration game in an infinite procedurally generated galaxy. It was a universe of 18 quintillion planets with countless numbers of life forms and civilizations ready to be explored. Unfortunately what was expected to be 2016’s Game of the Year barely made Game of the Week when it launched.

Since then the game has gone through numerous patches and updates to try and deliver what the game should have been 2 years ago. 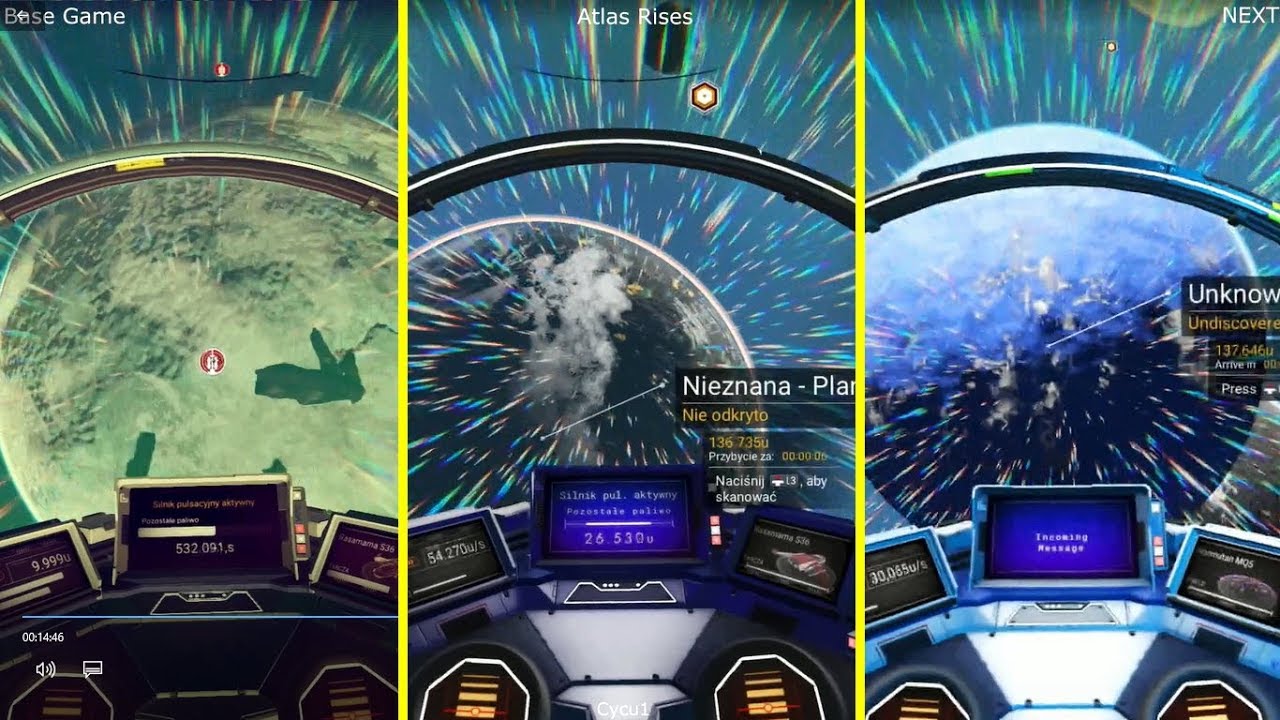 Since the launch of No Man’s Sky in 2016, it’s gone through four major updates and countless numbers of patches to keep improving its gameplay quality. The updates entitled Foundation, Path Finder, Atlas Rises and Next have only gotten bigger and better, giving the game an extremely robust gameplay to what it had when it first launched.

It’ll take way more time than you want to spend watching this video to go over all the new resources, blueprints, ships and weapons that have been released, so instead we’ll focus on its biggest change in features to date. 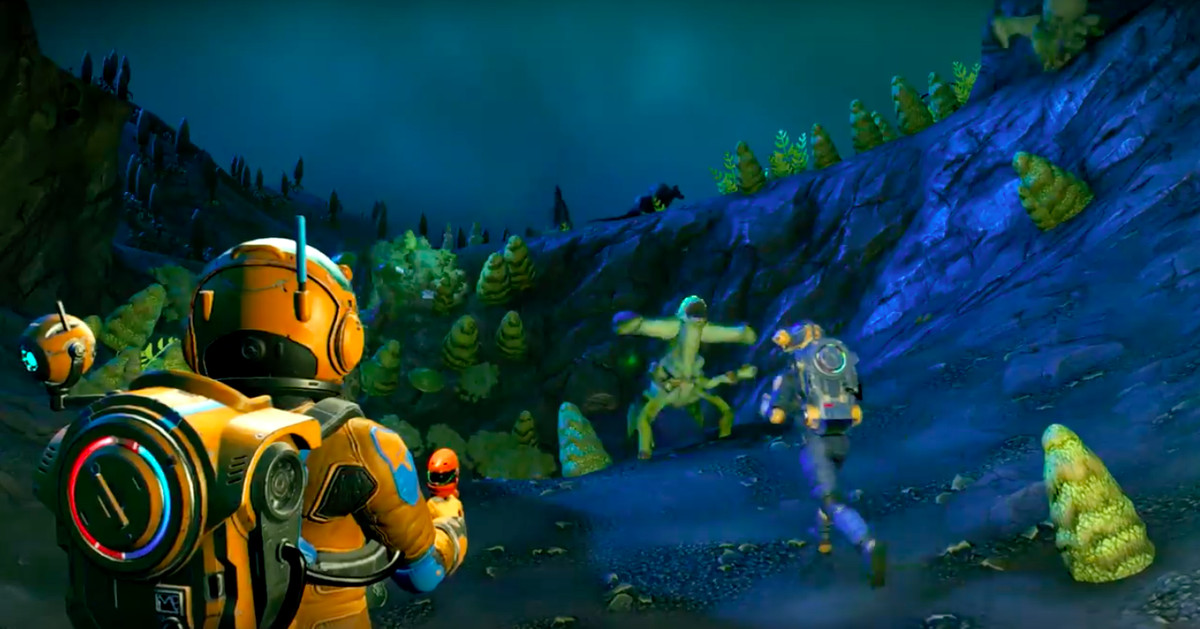 When No Man’s Sky released you wouldn’t be wrong in assuming it was an early access or technical demonstration of the game that was promised. While there were a huge number of procedurally generated planets and environments, the content was still very light and after a couple of hours, the most worthwhile thing you could do was take a couple of screenshots for your desktop background.

In the latest Next update, Hello Games has taken its visuals to a whole new level with better attention to detail, effects and lighting. In its initial launch, the overall sameness of each planet got old pretty quickly. The biomes lacked a richness of depth and it became a chore to walk around what looked like the same place for 20 minutes. Players were simply uninspired to explore.

The update has created a much more vibrant and diverse planetary exploration experience that teams with life and character. The terrain generates faster and ground, water, and cloud textures have been upgraded. This attention to detail while small goes a long way in adding depth into the once flat and ringless planets. Even the flora and fauna of each planet have gotten a much needed revamp. The creatures while still odd and terrifying now have a plethora of responses and personalities for you to learn about. All this just adds to a truly rich ecosystem which makes a planetary discovery feel worthwhile.

In addition to this visual update is the introduction of a third person camera. I’m an FPS girl personally but the beauty of No Man’s Sky is truly is wasted in that perspective. This third person camera gives you a sense of the scale of your place in the universe and now that you can customize your character you’re able to enjoy looking at all your fiddling about and questionable colour choices. 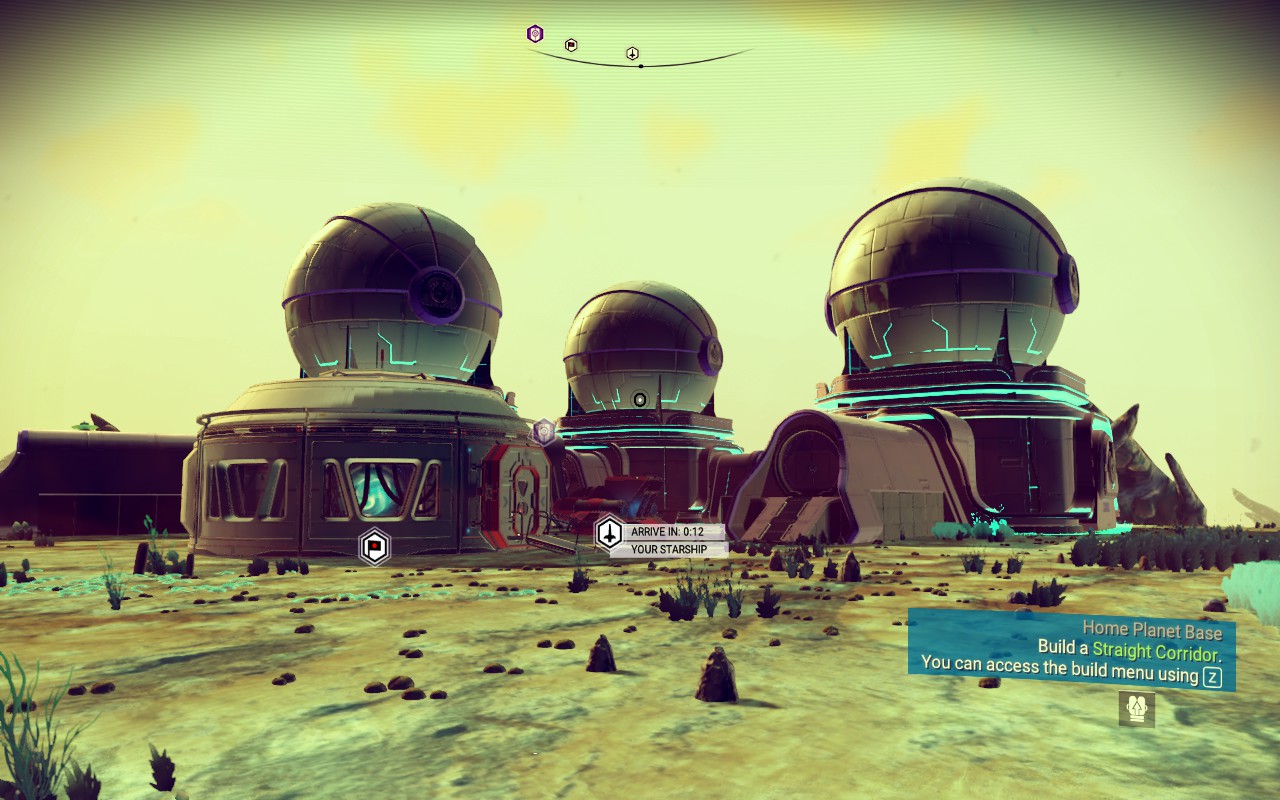 The first big update that came to No Man’s Sky introduced base building. It’s one of the core components of the game today and it allowed players to find and claim bases on planets that they liked. You were able to build a host of different features including farms for that loot grind as well as storage. That would help to alleviate the inevitable inventory issues that you’ll run into when you’re forced to dump out your cobalt for gold. This will inevitably lead you to find a ship that you need said cobalt to fix about 5 minutes later.

In the Next Update, bases are now able to be built anywhere and by anywhere I do mean anywhere. On the top of a mountain or under the sea, wherever you think will be the coolest place for your base. And if there’s some uneven terrain messing up your site the new terrain manipulator will take care of that too. Friends are able to share in the creation of your base and bases, in general, are larger and more complex. Best of all you can now own multiple bases and place teleports so travel is a much more streamlined experience.

Teleportation was a highly requested feature in No Man’s Sky, before this, you were basically just walking everywhere. It got kind of dull. I signed up for the wonder of exploration, not the actual tediousness of walking around. But with teleportation now you can just hop into a portal and jump to distant places instantly!

Don’t want to portal but don’t want to walk on the planet either? Exocrafts were introduced in the Pathfinder update and it upgraded you from foot to land-based vehicles. You could use the vehicles to explore, gather resources and even test out your driving skills on race circuits. Now with multiplayer on the way you’re able to turn your home planet into a Mario Kart style race track! Watch out for the wombat/zebra/moth thing.

Introduced in the very first Foundation update, Freighters are colossal interstellar starships that worked as a sort of floating base. In there you can grow plants, store cargo and keep your very own collection of starships. This becomes quite handy in the Pathfinder update when Starship Specialisations are also introduced and it became handy to have more than one type of ship.

A girl can always use more ships, which is exactly what the Next update brings us – a fleet of Frigates. Frigates are these smaller support ships that you can send out on expeditions that play out in real-time.  You can have up to 50 Frigates at a time and the more you have the better! So keeps an eye out for any when you see them floating through space. 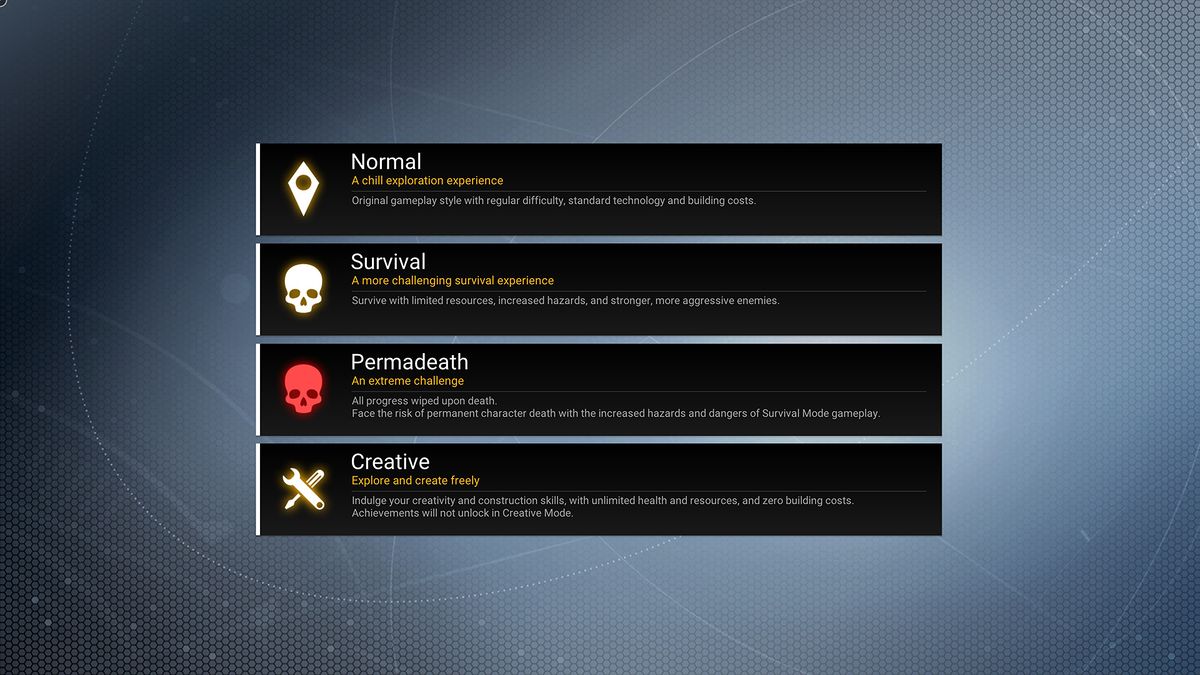 The Foundation and Path Finder updates introduced the game modes Survival, Creative and Permadeath. For players that were looking for a more difficult challenge, Survival forced you to try and stay alive with limited resources and stronger more aggressive enemies, not to mention those intense environmental hazards. Permadeath is a variation on that mode that will result in the permanent death of your character should you die.

I prefer to stick to the Creative mode myself where you have unlimited health, resources and you can just build whatever you want. Much easier to get that gram.

No Man’s Sky released its third major update Atlas Rises. With it came the beginnings of a multiplayer. Well, if you can even call what they released multiplayer. The developers stated that “interaction with others is currently very limited” and they definitely weren’t lying about that.

Basically what the update did was show that if someone was in the same space as you’re in they’ll look like a floating blue orb. Note that you can only be with 16 orbs at a time or the universe will implode. You won’t be able to see their character or their ship; neither can you affect anything in their game. But what you can do is talk to them on Voice Chat. Also, you can build a little monument to commemorate you finding your new glowing friend. My mother told me to never talk to strangers but I guess they’re not a stranger if you have a monument together! 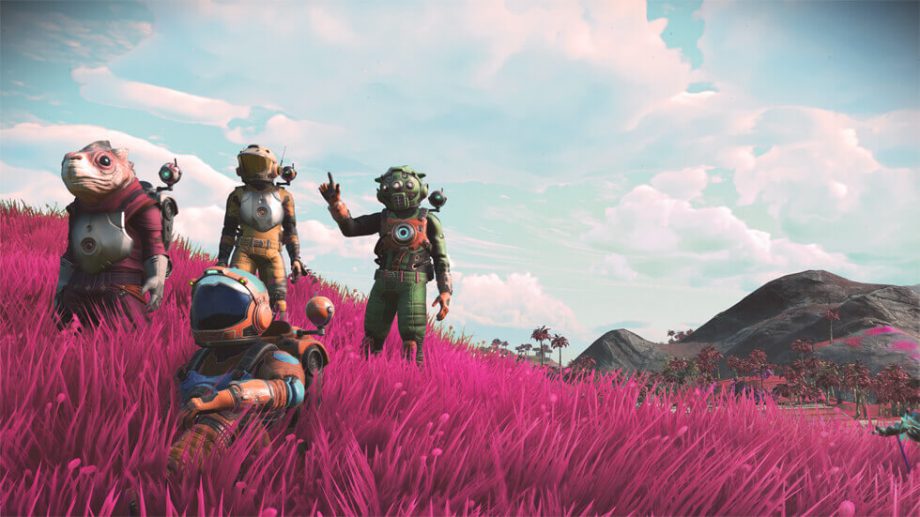 2 years later we have a feature that actually resembles multiplayer! No more just talking to lifeless glowing orbs or finding out that Cheetos26 has named this awesome planet that you found before you to prove that other people were in the system. This is a true multiplayer that allows you to explore space with your friends.

In the game’s latest update Next, your glowing orb friends have now been upgraded to real players! Well, only the three that you can choose to team up with, the rest of the people occupying your place are still orbs, but it’s a start. Your friends now fully corporeal can help you build all the things, explore the galaxy, undertake missions and my personal favourite reenact the Battle of Endor. “All wings report in”.

Like in most open world games, the story generally comes secondary to the world created. It’s always more about the journey; the exploration and the helping of random villagers find their things. I know I left Princess Zelda stuck in Hyrule Castle for about a bajillion hours longer than I needed to while I was lifting every rock in the Kingdom to find Koroks. But it’s still nice to have something that propels the game forward and give it some direction.

No Man’s Sky launched with a fairly bare-bones but promising storyline. I’ll summarise it here if you don’t want any spoilers I suggest you skip on ahead. 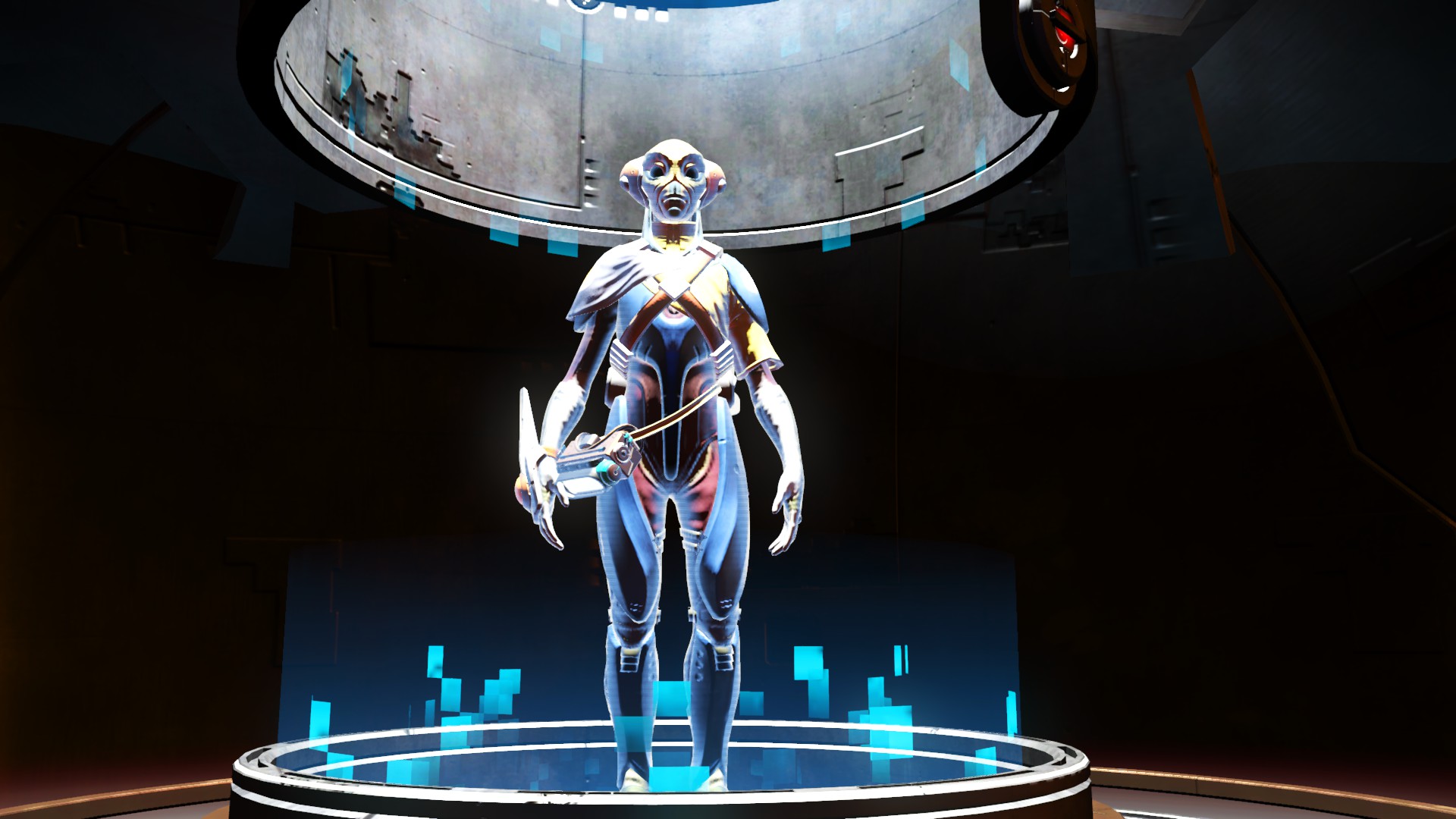 A long time ago an entity known as Atlas created a simulated galaxy. When you awaken on your planet, Atlas sets you on a path to get to the centre of the galaxy, the source of mysterious and omnipotent power. I still haven’t really figured out what the point of that was but depending on the path you take, when you reach the centre of the galaxy you discover some sort of glitch in the matrix and restart on another galaxy.

In the Atlas Rises update, the main storyline gets fleshed out with a whopping 30 hours of new content. Quite early in the game you get roped into saving an alien called Artemis, he’s part of a race of sentient species known as Travellers. Artemis wants to meet you, but then promptly ghosts you with that whole the world is ending so the comms system doesn’t work very well gambit. Not one to take this lying down you hunt for him throughout the galaxy.

Here’s where you get a bit more than your bargain for. It turns out that Atlas, the mega cosmic entity and creator of the universe was just a computer terminal all along. Now it’s dying and the universes are starting to fall apart. The story is a pretty slow-burn involving the faltering fabric of the cosmos told through sparse bits of dialogue from random NPCs. But in the end, your journey to the centre of the universe and have to decide the fate of the galaxy.

At this point in the game, it was definitely more story and lore content than anyone had bargained for and there is a solid narrative pull. The Next update, however, doesn’t so much add to the main world ending story but instead reboots the introduction.

It seems like anytime No Man’s Sky does a big update, the best thing for you to do is just restart the game. It’s a pain but the new introductory missions make it well worth it. There are now new mission chains that introduce you to some of the game’s more advanced features. In Next, missions have expanded into a variety of types, from photography, feeding, freighter attacks, defence, archaeology and even specialized hunting missions. All in an effort to gather those credits, blueprints and gain some rep from the locals. Indigenous species respect a Traveler that repeats quests.

No Man’s Sky has been drifting through an asteroid belt of negativity since it was first released back in 2016. But you’ve got to hand it to Hello Games; they’re sincerely dedicated to delivering the game that they promised. Churning out patches and updates without any microtransactions or paid DLCs when they could have easily turned tail with the money they made. I guess No Man’s Sky is truly a place where no developer has gone before.