What To Know Before Playing Warframe

Nintendo Switch is slowly becoming the great alternative console device for those that don’t have a gaming PC but still want to play all the things. Next on the list to be ported is Warframe the free-to-play, third-person, co-op shooter for a race of cybernetic ninja warriors. The news was announced at this year’s TennoCon, the annual convention for Warframe.

Warframe initially released on PC back in 2013, and shortly after on PS4 and Xbox One. It’s a bit of an ambitious port considering the massive open worlds and intricate weapons and armour system, but you’ll be happy to know that it’s being handled by Panic Button, the company that handled the porting of Doom and Wolfenstein II. Although no release date has been confirmed just yet, you can check out the trailer below to see Warframe running in action on the Nintendo Switch.

Warframe is a great free-to-play game, but upon completing the initial gameplay tutorial you’ll realise that there a huge number of systems, stacked on other systems that can get pretty overwhelming when you try to grasp everything at once. So this guide is here to help you get started and not give up like I did for a couple of weeks after that first introduction.

You Got Me Flyin Solo – Don’t Join A Clan Immediately

The best thing to do at the beginning to just pick your starting Warframe, gear up and just dive into the missions. You’ll be given a choice between three Warframes – Volt, Excalibur, and Mag. It doesn’t matter which you choose, as you’ll be replacing most of them pretty quickly, so just pick up whatever you think is the coolest. The only note is that Volt is harder to farm up in the late game.

Just follow the introductory story and you’ll be able to get a handle on the gameplay mechanics in no time. Just try to ignore the large number of items and resources you’ll be getting until you’re comfortable with the basic gameplay system. Eventually, once you understand how the core mechanics work the other systems will make more sense and be easier to understand and implement.

Warframe is a co-operative game and while you might think there’s safety in numbers the missions at the beginning are seldom very difficult. So you’re better off playing solo for a bit until you get better at playing the game. You don’t want to be “that noob”.

You’ll probably want to join a Clan eventually as it gives you the opportunity to research gear that can’t be attained anywhere else. It’s pretty expensive researching gear on your own and it costs a lot of resources but with a Clan, you can split up the cost of researching. For most solo players, upkeeping a Dojo and researching everything on your own can get quite expensive.

Warframe is a pretty great free-to-play game that doesn’t force you to spend money to get ahead. The only thing you’ll have to pay with though is with your time. Warframe has a pretty large database of resources to farm that can be made into dozens of weapons, Warframes, equipment etc. Thankfully there’s no cap on your resource pool so whenever you see something glowing just go ahead and grab it. Later, when you’re ready to start building new gear, you’ll want to spend more time learning which planets have which resources and farm those missions for your desired items.

All of Warframe’s missions are organized into a huge galaxy map called the Star Chart. As you progress through the game, you’ll unlock more and more missions. Unlocking everything is the key to having all the options necessary to get all the stuff you want. So, do that first. Unlock everything. Remember to take a look at the Alerts in the top-right portion of the Star Chart. You’ll want to do a lot of those when you’re starting out, and later on for specific types of resources. Do all the Nitain Extract Alerts. Just trust me on that one.

If you took our advice to just jump into missions to explore and grab loot you’ll likely find that once you’re ready to start building new gear, you’ve already got plenty of resources to craft without having to farm. If you see you’re lacking a certain resource to make something, you probably haven’t reached a planet that has said resource available. Just get back to playing missions and you’ll get there eventually.

The Mod Squad – Auto Equip At The Mod Station

When you start noticing that the missions are actually becoming a bit difficult, it’s probably time to finally start diving into more of the game’s systems. The three areas to focus on here are mods, equipment and building gear at the Foundry.

We’ll start with mods because they’re the easiest to tackle even though they seem damn-near impenetrable in the early goings. Once the Mod station becomes available, you’ll be able to attach boosts to your Warframe and all of your major equipment. Our suggestion is that you rely completely on the option to automatically attach mods. You’ll want to learn more about mods deeper in the game but, in the early goings (which can literally be dozens of hours), you can completely avoid a lot of stress by falling back on auto equip.

Rather than work from the mod station, simply enter your equipment manager. Under each piece of equipment is an option to “Upgrade.” Select that option and, from there, select the “Auto” option. Boom, your gear is now stronger. Do that for each piece of gear including your Warframe, individual weapons, etc. The important thing is that you remember to go in and do the exact same thing at least once per play session since you’ll constantly be picking up new mods on the battlefield and hitting auto will usually swap out mods so that your gear is as powerful as it can be.

Mastering The Art Of Ranks – Keep Maxing Out Your Gear

Levelling in Warframe is a little tricky. As you play missions, all of your gear will level up individually. That, plus your progression across the map, as well as various other in-game factors, will build toward your Mastery Rank. Every level you gain improves your Mastery Rank score, which is your overall account level. Raising your account level offers a bunch of benefits, not the least of which unlocking new gear. But it also gives all of your weapons a minimum amount of mod slots corresponding to your level, the ability to farm more reputation on a single day, the ability to hold more Void Traces, among a couple other things.

It’s important to know that every piece of gear tops out at Rank 30 so, if your gear isn’t at that rank, it hasn’t benefitted you to its maximum potential. When a piece of gear hits rank 30, though, it’s time to swap it out with something else and get back to grinding. Again, you can play however you like with whatever gear that you like, but this is an important step if you want to keep progressing your Mastery Rank.

When you’ve got some resources piled up, it’s time to head to the in-game store. Let’s say you want to make a new primary weapon. Head to that tab in the store and be sure to switch the display to “blueprints only.” From that list, pick the weapon you want and select its blueprint. The blueprint shows exactly how many/what type of resources you need, so you’ll know immediately if you’ve still got some grinding to do or if you can just build the desired weapon. We’d recommend picking something you’ve already got the resources to build and purchasing it using the in-game currency. From there, you can head to the Foundry, select the blueprint and spend the resources to start building it. You’ll actually want to do this before your current gear hits rank 30 because building most items takes between 12 to 72 hours. Don’t worry; the clock is still ticking even when you aren’t playing the game.

When you start playing Warframe, you’ll likely be granted a decent pool of Platinum. This is the one resource you seldom get in the game proper, so you’ll want to spend it sparingly. The main way to get more Platinum is to spend real-world money. (Don’t be upset the creators still need to make some money).

Since a bunch of stuff in the game, including Warframes, can be purchased with Platinum, it can be tempting to spend yours on some gear you just really want. We’d strongly encourage against that. Instead, the best way to spend your free Platinum is on extra “slots,” which are available for purchase in the store. You can only build as many Warframes and weapons as you have slots to hold them, so you’ll definitely want to fork over some Platinum to earn more storage space at some point.

Again, just about everything else in the game can be farmed and built from scratch so, as much as you might like to spend Platinum on that cool-looking sword, you’ll be able to build it yourself at some point down the road. Of course, there’s also nothing wrong with forking over a few bucks for a free-to-play game you’re getting hours of fun out of. If you dive into Warframe and find you’re having a blast, then dropping some fresh Platinum into your account is a good way to compensate the developer who made the game while treating yourself to some sweet gear you don’t have to grind for.

The All-Knowing Codex – When In Doubt Check The Codex 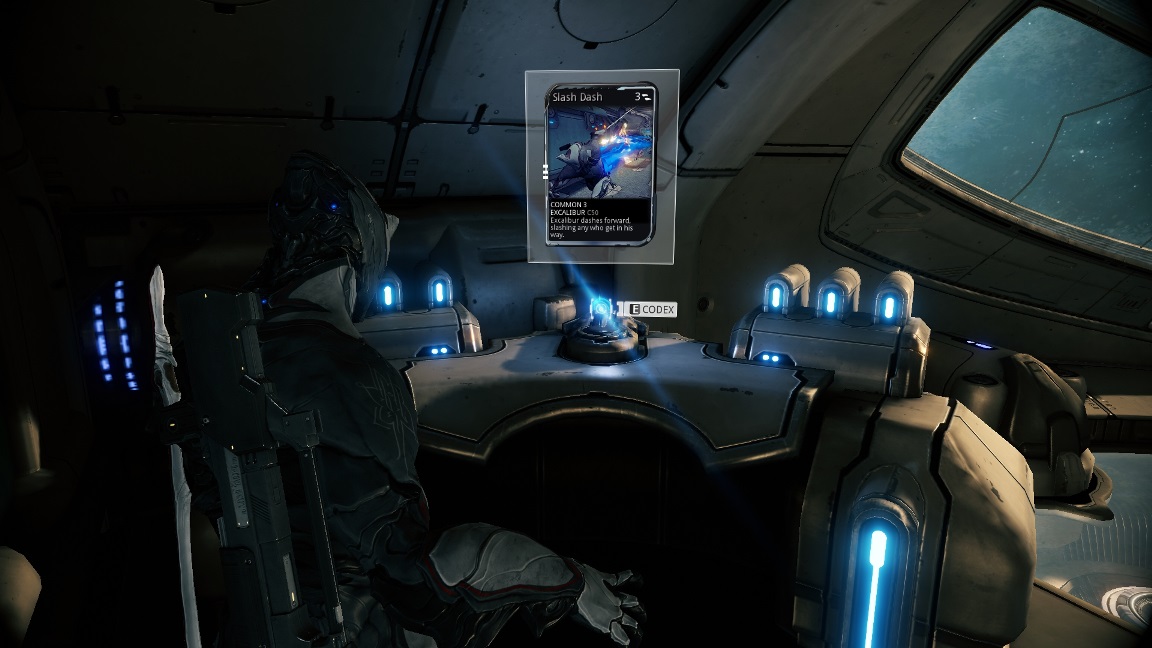 Many of Warframe’s systems are represented as consoles on your ship. The Communications area will likely be where you spend a lot of your time as it houses the Codex, Syndicates, Conclave and Market consoles. Conclave regards to the PvP game modes, Syndicates are where your quests, missions and alerts are, Market is for buying items, weapons etc. and the Codex is your backup index on all the items, lore and enemies. (In case your phone is too far to check the wiki). Sort of like the Grimoire in Destiny, the Codex has detailed explanations and will help you out. If you’re having trouble understanding something, the answer may be found there.

So that’s just a couple of things that will help you get started. The beauty of Warframe is that there really isn’t a wrong way to play the game and if you’re starting to feel overwhelmed just go back to playing missions and grinding for loot. The rest will all come naturally.