Everything We Know About Detroit: Become Human

While it’s been several years since this sci-fi story was revealed, Quantic Dream has been keeping quite a bit information under its belt, so we’ve broken down all the information you’ll need to know about Detroit: Become Human. Out next week on the 25th as a PlayStation 4 exclusive.

Quantic Dream is one of those rare studios which dares to be different, and the company’s 2018 title Detroit: Become Human looks to be keeping to that theme. The neo-noir sci-fi thriller that tells the story of a group of androids who are trying to rebel against an abusive society and the people assigned to hunting them down. It’s hard not to think of Blade Runner from that description, but Detroit: Become Human figures to distinguish itself from its inspirations through a branching narrative and its more thorough look at both sides of this conflict.

Detroit is the site of a new industrial revolution in a game about life — human life, artificial life, and everything in between.

Some people describe the game as more of an interactive movie but that’s not really the case as you will have full control over your character, and are free to explore. Gameplay revolves around interacting with contextual objects and making decisions that will focus on the narrative-driven experience. For those not familiar with Quantic Dreams’ branching paths just note that everything you do in the game will have an impact on how the story develops with outcomes either great or small. It’s all about influencing the game through your choices and watching it all unfold.

Expect an overwhelming amount of branched dialogue choices and multiple possible story outcomes. In fact, Quantic Dream suggests there are over 1,000 possible combinations. That’s likely an exaggeration as minor, inconsequential changes in detail will inflate that number, but you don’t have to worry about a shortage of conclusions. 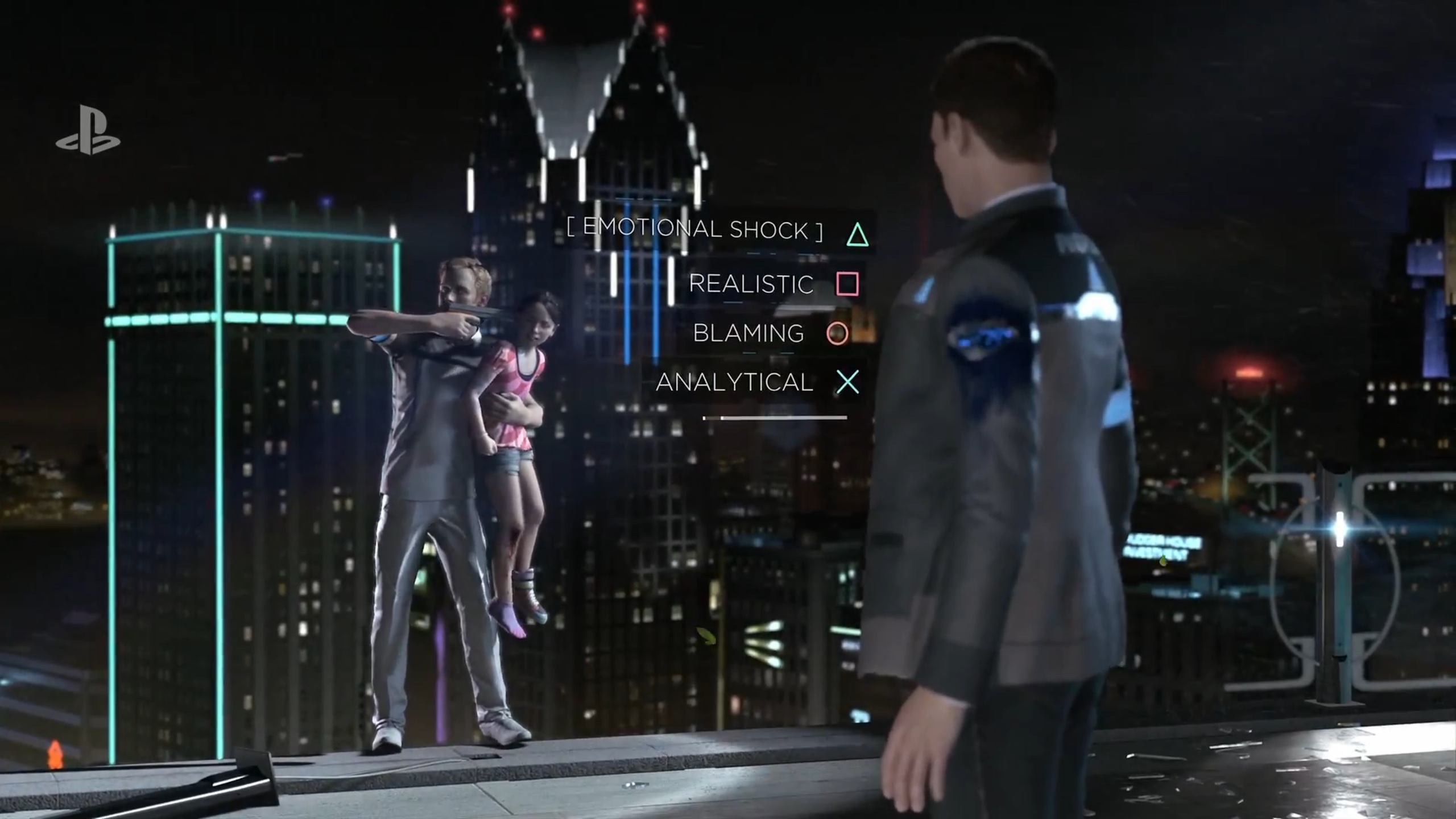 Detroit: Become Human is a classic thought-provoking story by Quantic. It’s designed from the ground up to make you question your every move, as well as your resolve, emotions, and morals. In this game, you’ll take control of at least three characters, all of whom are sentient robots called androids living in futuristic Detroit. These androids were first employed as helpers. Naturally, the humans thought this was the perfect role for them as they were to be emotionless beings whose actions are entirely programmed by their makers. But as these types of stories always go, they become aware, and they eventually figure out just how oppressed they really are.

You’ll see the events unfold through the eyes of three characters: Kara a typical service android, Connor an android detective and Markus the classic revel android. For more about our characters check out our android introductions here. The game touches on many of the issues prevalent in today’s society: racial inequality and prejudices; domestic abuse and violence; love.

Quantic Dream is trying something a bit different with Detroit: Become Human in comparison to its previous two games. In years past, the formula for deciding the outcome of a situation was hidden to the player. You were left to use your deductive reasoning skills to try and figure out where the story would turn. It was obvious in some cases, but really vague in others. It added to the feeling of uncertainty that kept you on edge and has become a staple trait of Quantic‘s games.

This time, however, we get what’s called a ‘Probability of Success’ meter that shows in real time the consequences of your choices and actions. It seems to be a reliable way to gauge how certain situations will play out and could ultimately help you figure out how you want to react to each situation. But it is only a probability of success, after all, and your outcomes are never guaranteed. Your choices of dialogue in any given situation are polarizing enough to root you to the spot with indecision as you feel for these humanoid androids. 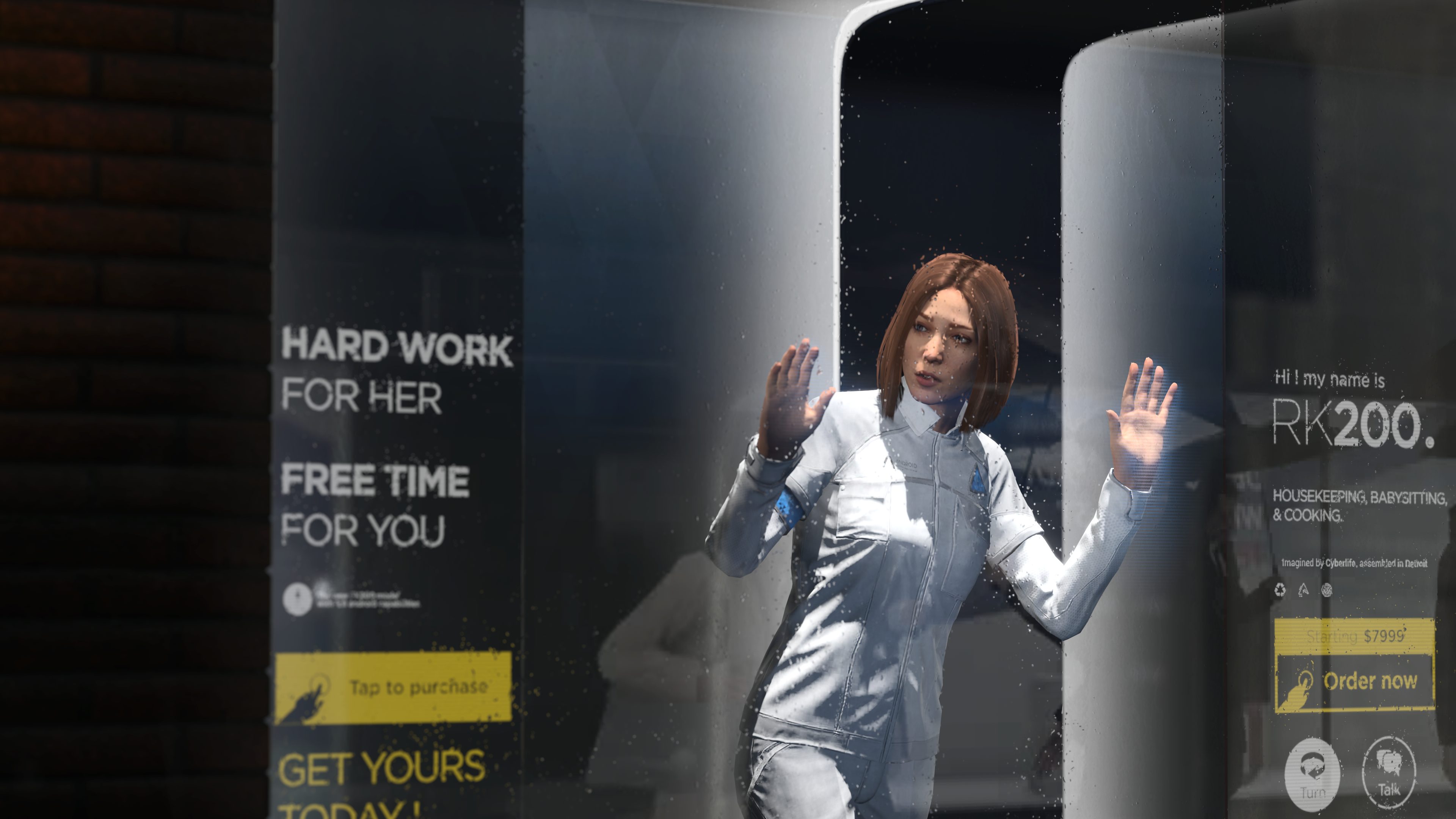 Detroit: Become Human is available for pre-order on the PlayStation 4 to be launched on May 25th, 2018. It’s currently retailing on the PlayStation Store in Malaysia for RM 209 and Singapore for SGD64.90. If you’ve already pre-ordered the game the pre-load will begin on the 23rd of May 2018.