How To Survive The Darwin Project

It’s the Battle Royale for Battle Royale games with The Darwin Project entering the fray. We got a first look at it at last year’s E3 and now it’s out on Steam’s Early Access the Hunger Games style arena is part reality TV show, part dying in a frozen winter wonderland.

Set against a post-apocalyptic backdrop, an impending ice age has kick-started a twisted new reality show, in which participants must fight to the death to earn their survival. You can battle it out with up to 32 players but that won’t be your only worry. The harsh climate will put even the most hardened survivalists to the test. Players must withstand extreme environmental conditions, track opponents, craft tools, set traps, and even negotiate temporary alliances to be the last one standing at sunrise.

The game starts with you being roughly dropped about 2km across the hexagonal arena that’s divided into seven sectors, armed with an axe and a bow, but no arrows. As you can see Scavengers Studio isn’t messing around so we’ve got here our survival guide to playing The Darwin Project.

Customise Your Crafting Wheel Before Entering The Game 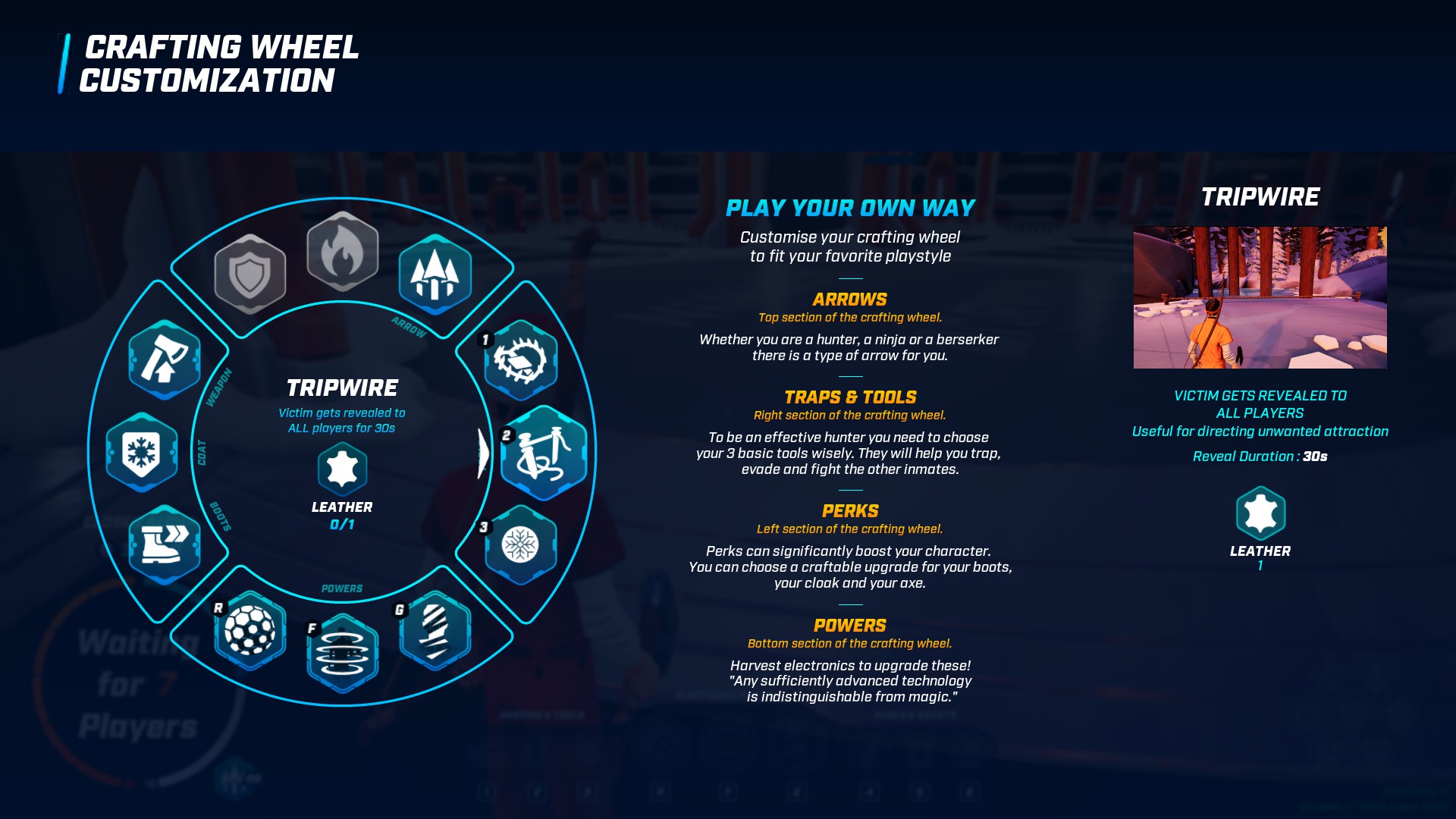 The crafting wheel is a core part of The Darwin Project, controlling what items you take into the battlefield. Whilst you can customise it in the pre-game lobby, you’re not constrained by time on the main menu – have a play around before you enter the fray, instead of scrambling before a game begins.

Elsewhere in the crafting wheel, you can tinker with your traps, perks, and powers. This will, of course, depend on your playstyle, so experimentation is key. However, traps like the Smoke Bomb are easy to recommend as they cancel tracking and allow you to slink off into the woods, making them a useful tool to have in your arsenal.

Make sure to check out your options for arrows. If you choose one of the game’s specialised arrows, you won’t be given five normal ones for free at the start of the match. Specialised arrows offer game-changing debuffs, including a tracking arrow that leaves a silhouette on your opponent for ten seconds, or the fire arrow, which deals more damage at the cost of combat range. 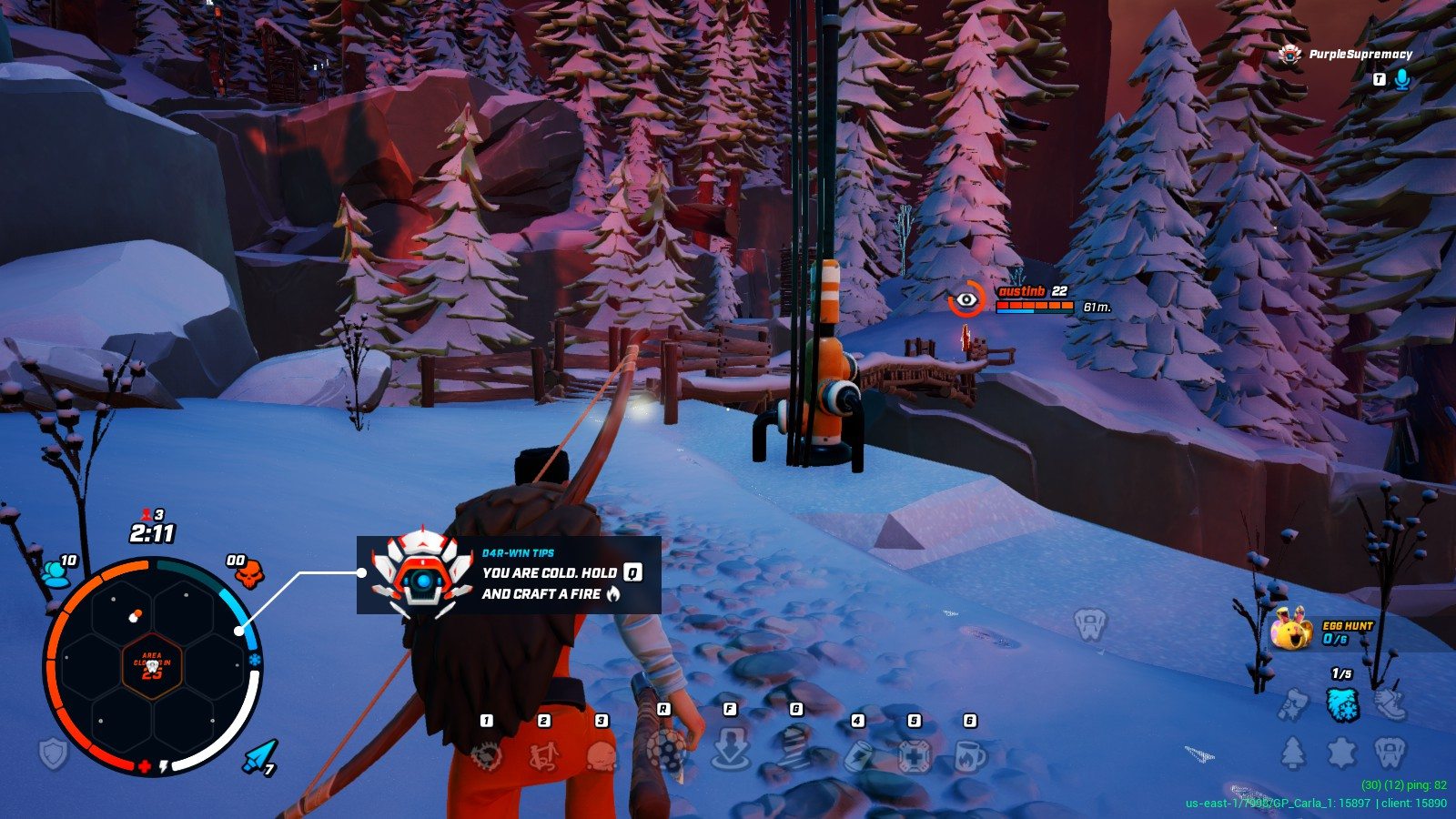 The ever-dropping temperature in The Darwin Project will freeze you to death before you even see another player. Walking around in the sub-zero temperatures in a prison jumpsuit doesn’t exactly work wonders for your homeostasis. Always remember to keep at least one wood in your inventory to craft a fire in a cold spot.  Similarly, look out for Leather to bolster your cold resistance with a Fur Cloak.

Ideally, you want to be as warm as possible before you start picking people off as the chill can chomp your limited health with ease. Try to keep at least one block of wood at the ready for a quick fire in a pinch. But do note that having to stay in proximity to a fire is also a serious danger to your survival since you won’t be able to dodge projectiles efficiently and the flames will act as a beacon to searching enemies.

Electronics Make All The Difference

Every few minutes, a piece of valuable electronics drops somewhere on the map, which can be crafted into more powerful items like a temporary shield or teleportation device. The location is announced to all the players ahead of time, though, and takes a particularly long time to gather, so going for one can be a dicey proposition.

Push for electronics hard and early. These will give you the biggest advantages over all other players. Like the air drops in PlayerUnknown’s Battleground expect them to be heavily contested but it’s worth the shot because, without them, you’re basically staring down a rapid-fire turret with your snowball. These electronics become permanent after you’ve made them.

When and where these events occur during the match is controlled by another player known as the Director, a robot camera master of ceremonies hovering overhead. Scavenger Studios is still tinkering around with the abilities of what a Show Director can do but I think we can expect those abilities to mess with everyone on the board and of course, make keep up the entertainment for those of us in the Capitol.

Taking out defenseless animals is a solid survival tactic, even if they are made of metal. Robot Deer are a rare roaming mob found across The Darwin Project’s map. You will often find them trapped in terrain, since, you know, it’s Early Access. Take out your axe and crack them open like a pinata for randomised loot. The loot ranges from arrows to traps and rare consumables.

You’ll probably struggle to find consumables outside of chests and other players, so finding and culling the Robot Deer is even more important than you may think. 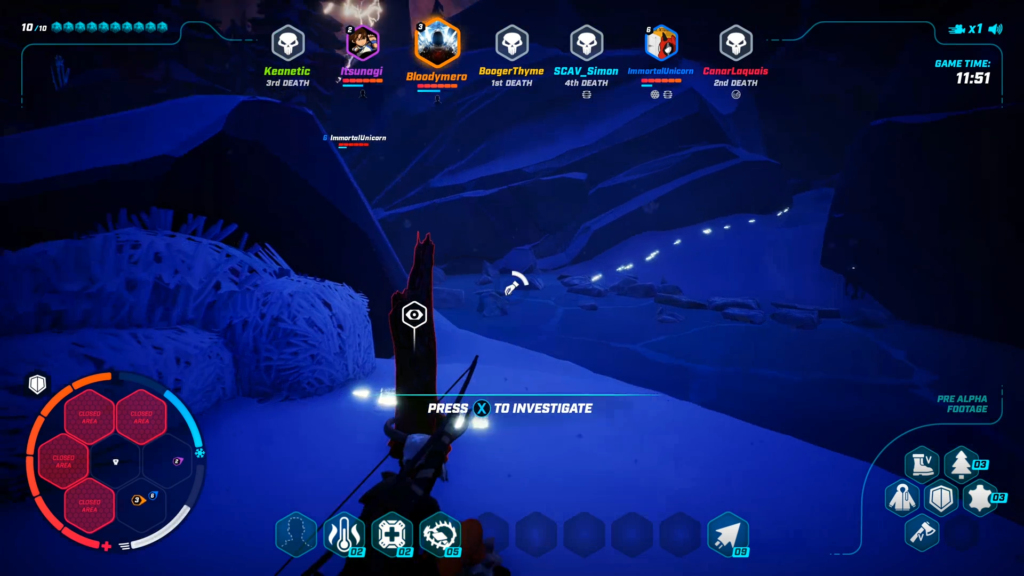 Crafting is key but it does eat up a considerable amount of time especially int he early game. On top of that, it basically gives everyone on the map a key indicator of where you are if you don’t have smoke bombs. Not the cleanest of crafters everytime you use the crafting wheel, an object is left on the floor in your wake. Other players can find and use this object to track you, illuminating your movements and location on their HUD.

Therefore, when you can manage it, make sure you craft behind terrain or in secluded blind spots. Whilst it is inevitable that you’ll be tracked eventually, don’t make it easy for them. Of course, if you’re playing to win Katniss Everdeen you can always use this to your advantage to get the drop on your enemies, to track your prey. The hunter becomes the hunted.

As soon as you drop into the tundra, you should immediately look for resources. A key to success in the early game is to acquire three pieces of Leather and Wood so you can craft Armour. Armour blocks the next incoming attack, giving you an essential lifeline if you’ve been caught out – much like Fortnite’s shield. You’re able to react and turn the tide.

If possible, you may even want to stack three Leather and Wood at all times so you can craft more Armour once you’ve been hit. Health is also notoriously tough to recover in The Darwin Project, making it essential that you maintain it as best you can with Armour. 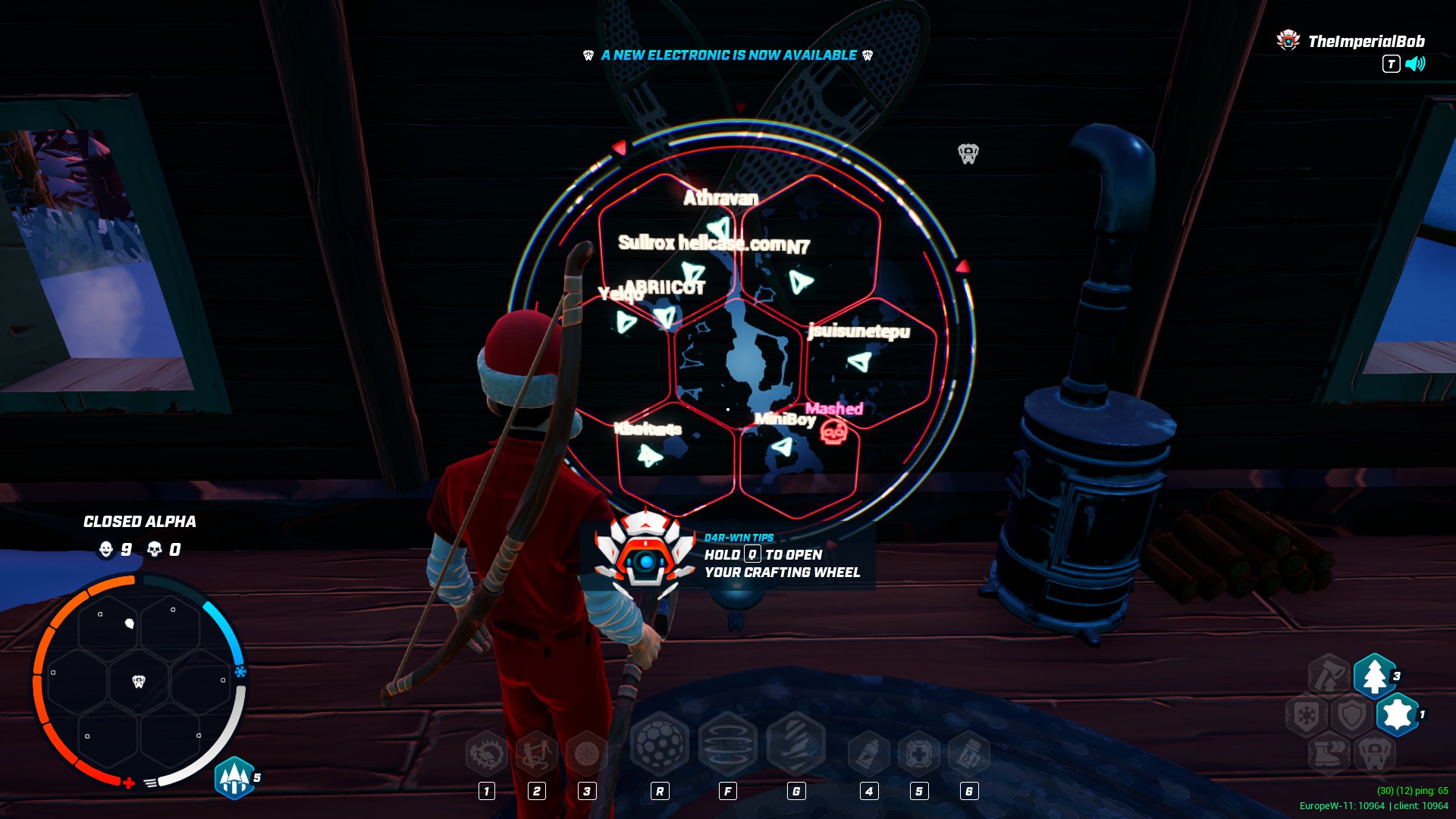 The map while not big in The Darwin Project still holds a lot of different little terrain for people to camp out at. If you’re wandering around and see a red pulsing circle in the distance that means that there’s someone there for you to hunt, giving you a significant advantage.

Another point to note when it comes to tracking is that if you come across one of the game’s rare wooden buildings it may contain a hidden radar that tracks the exact location of every player on the map. Clearing the map of others as early as possible will definitely help you down the line. So follow the clues and clean up.

Whilst in the other popular battle royale titles you’d be inclined to mute everyone to avoid the awfulness of pre-game lobby chat, The Darwin Project bucks the curve. The reason being the existence of the Show Director. The Show Director has the power to give you warmth, health, ammo, or even invincibility so best get on their good side, eh?

Whilst some Show Directors ruin the game by creating an unstoppable force, most are sympathetic to underdogs and will help you out if you’re in a bind. This is only made easier if you be personable or ask for help. If you’re feeling incredibly confident, you could also ask for a Manhunt, alerting every player to your location. Why would you do this? Because you receive essential resources like arrows and tools for surviving the chaos. On the flipside, he could call a Manhunt down on you just for funsies.

If the Director starts talking to you, talk back. If you’re engaged in a fight, you can talk to the other player as well. Keep things interesting. This streamer-type engagement is what elevates the mostly solo task of playing into something that’s, in most cases, highly entertaining if not out and out hilarious. 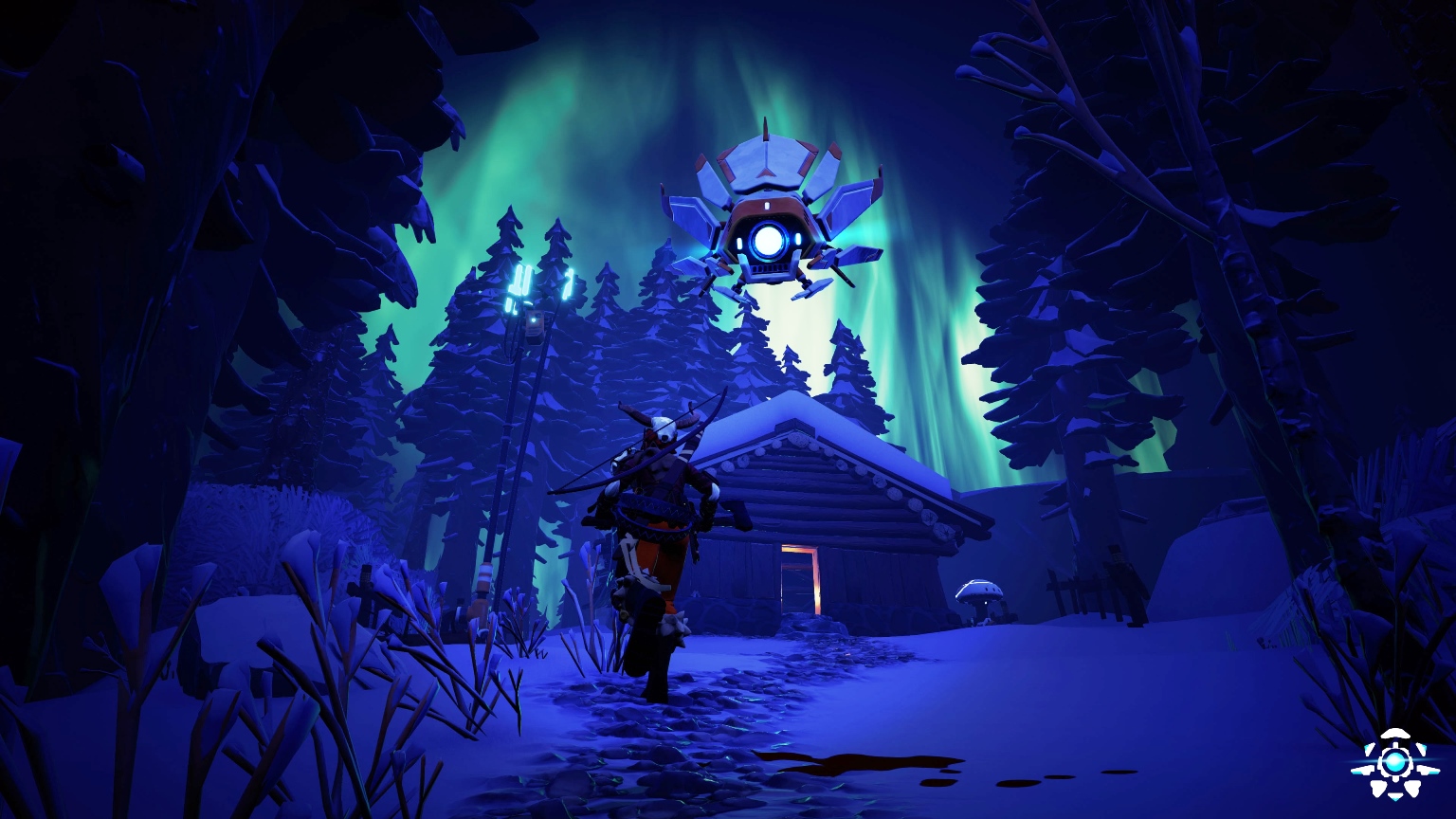 As the Director, you’re able to affect the entire map of The Darwin Project by closing off zones, dropping nukes, causing gravity storms and basically being a wild card in the match. In order to perform one of these actions, you have to wait until you gain an Ability Point.

Don’t play favorites too hard — make this an interesting game for everyone, and try to be a little fair in how hard you troll each of your little puppets. Make ’em dance! (No real dance button provided, unfortunately)

At player death, others have the opportunity to rate you as a Director. The more engaging you are, the likelier they are to score you higher (or at all). Be aware that if your Director rating falls below a certain point, you’ll be limited in your Director abilities to those that affect the game only.

So there we have it The Darwin Project! We’re having a ton of fun playing it over here but let us know what you think and if you’re playing hit me up! And as always may the odds be ever in your favour.