What To Know Before Playing Bloodborne

Bloodborne is out for free on PlayStation Plus this March. From the creators of the infamously difficult franchise Dark Souls, From Software’s reputation precedes it when it comes to developing demandingly difficult games. If you’ve never played a Souls game and like me were slightly intimidated at starting this intense gothic action RPG. We’re here to help you out with some early tips and strategies that will help you die a few times less as you face the horrors of Yharnam.

It Starts With Death – Choosing Your Starter Gear

You’ve probably been playing Bloodborne for a couple of minutes in when you encounter your first beast, a mutated werewolf that promptly rips you to shreds. Don’t worry this is just Bloodborne‘s way of introducing you to the Hunter’s Dream, where you’ll be given access to your starter gear. Here’s everything you need to know to help you make an informed decision. 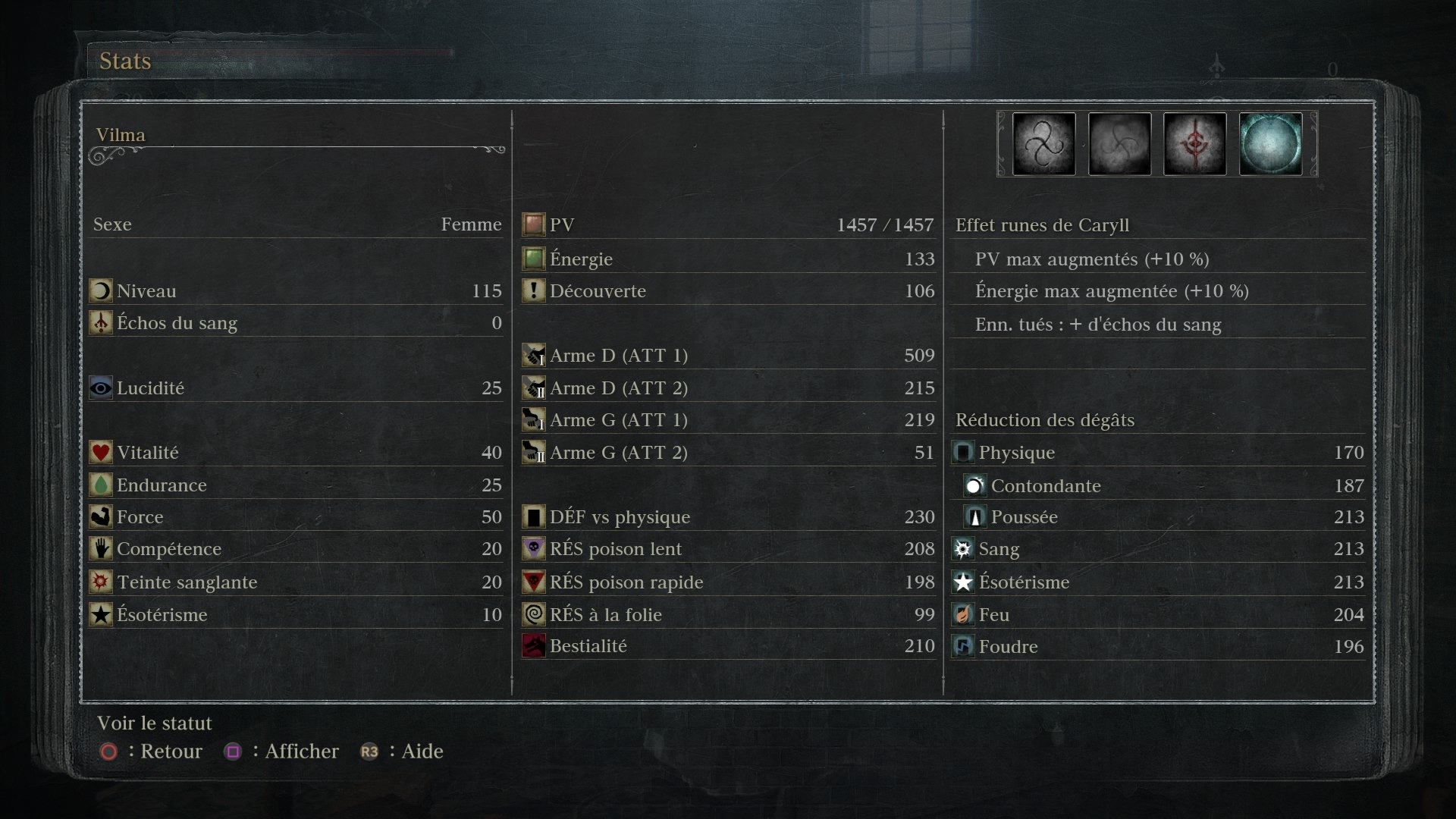 There aren’t specialized classes to assign to your Hunter in Bloodborne. Instead, you pick from an intriguing list of backstory origins during character creation, which simply determines your starting stats. Outside of personalizing your avatar’s lore, some origins will serve new players better than others.

Combat is pretty dependent on your Endurance and Strength stats, with the former determining how frequently you can dodge and attack. The latter making you hit harder and resist physical damage. Vitality is also important because it increases your health bar – but staying alive in Bloodborne depends more on your mastery of the combat mechanics than your total HP. When making your first character, it’s not a bad idea to choose the ‘Milquetoast‘ or ‘Violent Past‘ origins to give the aforementioned stats a helpful boost.

Offense Over Defense In Bloodborne – Make Use Of The Regain System

If you’re a Souls player you’re familiar with the slower attack and defensive mechanics of that game. But in Bloodborne combat is much faster than and sometimes, you need to go on the offensive. Whenever you get hit, striking back will let you restore some (or even all) of your lost health, thanks to the Regain mechanic. Regain System is a part of combat where you have a very brief window of opportunity to regain lost health by dealing damage to the enemy that hit you. You’ll know you’ve regained some health if you glow red with a successful blow.

Instead of backing off whenever you take damage, you’ll be rewarded for fighting through some pain in a close battle, or being aggressive when an attack takes you by surprise. Just don’t try to take on too many enemies at once, because it’s easy to get overwhelmed and end up losing health faster than you can fight to get it back.

Two Weapons Are Better Than One – Methodically Transforming Your Trick Weapons

When entering a Beast fight it’s always better to have more weapons. In Bloodbourne your primary melee weapon can toggle between different weapon lengths by tapping L1. Keeping an eye on distance management is a crucial part of combat. So the range of your weapons can make a huge difference against a particular enemy. The longer version will obviously give you better reach, something to consider when taking on enemies with longswords and spears. Conversely, the shorter version of your weapon allows for quicker attacks.

Also, be aware that switching to a two-handed form of something like the Hunter Axe means you can’t make use of the pistol or torch in your off-hand. Once you really know your favorite weapon inside out, you can even switch forms mid-combo, but it’s probably best to avoid that trick when you’re first getting your bearings.

With every enemy, you defeat in Bloodborne one of the numbers on the upper right corner of the screen increases. This is known as Blood Echoes, the equivalent to souls in Dark Souls. Blood Echoes are Bloodborne‘s form of currency, meaning that you’ll need them to level up or buy items. If you die in Bloodborne you’ll end up losing whatever Blood Echoes you have.

As with Dark Souls, you have one chance to find your corpse and reclaim your Blood Echoes when you fall in battle. Die again before doing so, and all those precious Echoes disappear forever. Like Dark Souls, a bloodstain will indicate the spot where you died. Interacting with it will give back your blood echoes. Bloodborne ups the ante even further: monsters near your dead body can absorb its essence, requiring you to kill them to get your stockpile back. You’ll know who took them thanks to their blue-glowing eyes

If you’ve collected a ton of Echoes, resist the temptation to explore new areas. Head to the Hunter’s Dream instead, and spend them on stat boosts or equipment.

A Drink To Your Health – Heal Yourself With Reckless Abandon

You might be familiar with Dark Souls‘ Estus Flasks: potions that you have to ration out during your adventures, given that they can only be replenished at a bonfire. But the self-healing system in Bloodborne works very differently. From the get-go, you’re able to carry up to 20 Blood Vials, which you can chug to regain a decent chunk of health. And crucially, enemies will often carry more Blood Vials to replenish your stock, sometimes dropping as many as four upon death. Some creatures, like the aforementioned ogres or red-furred werewolves, will reliably drop plenty of Blood Vials. Once you know how to take them out easily, restocking on potions is a cinch. Heal yourself whenever you feel like topping off your health because you can always find (or buy) more Blood Vials later.

The decrepit city of Yharnam is one big, interconnected labyrinth, full of crisscrossing paths and passages that bridge areas you initially thought were far apart. Oh, and there’s no map screen to keep track of where you’ve been, meaning you’ve got some serious mental mapping to do every time you set foot in unfamiliar territory.

There’s an easy way to do this: once you’ve cleared out the enemies in an area, take some time to really explore the environment. You’re guaranteed to find a few shortcuts or secret item stashes, and you’re far less likely to get lost if you fall in battle and need to find your body. It takes a while to fully explore, but once you’ve visited each section repeatedly, you’ll realize that these areas are actually smaller than they initially feel. If you come across a locked gate, there’s a very good chance that there’s a path to the other side of that gate. With the gate open, two lanterns checkpoints that were once far apart are suddenly close to each other.

Get Your Guns Out – Know And Master The Visceral Attack

With a firearm equipped, a shot fired by pressing L2 with proper timing just before an enemy attacks causes the enemy to stagger. An enemy can also be caused to stagger by facing its back and holding R2 to unleash a charge attack. Once an enemy staggers, press R1 to execute a visceral attack.

With the right timing, shooting an enemy in motion can stun him and bring him to his knees. You know you’ve accomplished this if you hear a high pitched metallic sound. Knowing when to fire depends on the enemy but the minuscule window of opportunity is usually when they’re about to strike you.

A stunned enemy will allow you to deal as many as six melee blows before they can fight back. If you’re right next to your foe while he’s on his knees, you can deal a massive “visceral” stab attack. It’s deadly enough to finish off most non-bosses in a single strike and can take off significant health from the bosses. Note that guns in Bloodborne don’t work like they do in most games. Instead of using your firearms to deliver damage from a distance, you actually want to save all your bullets for when enemies are right up in your face.

Of course, there’s so much more to the intricately deep world of Bloodborne but here’s hoping that these few tips will help you to get started. Safe travels fellow Hunter. Bloodborne is one of the free to play games with a PlayStation Plus Membership. Along with Bombing Busters, Garou: Mark of the Wolves and The Darkness II.