Kickass Marvel Women We Want To See On Screen

Who run the world? In honour of International Women’s Day taking place this March, we’re going to highlight some of the kickass heroines we want to see in the Marvel Cinematic Universe. Because let’s be honest the MCU is a bit of a sausage fest. 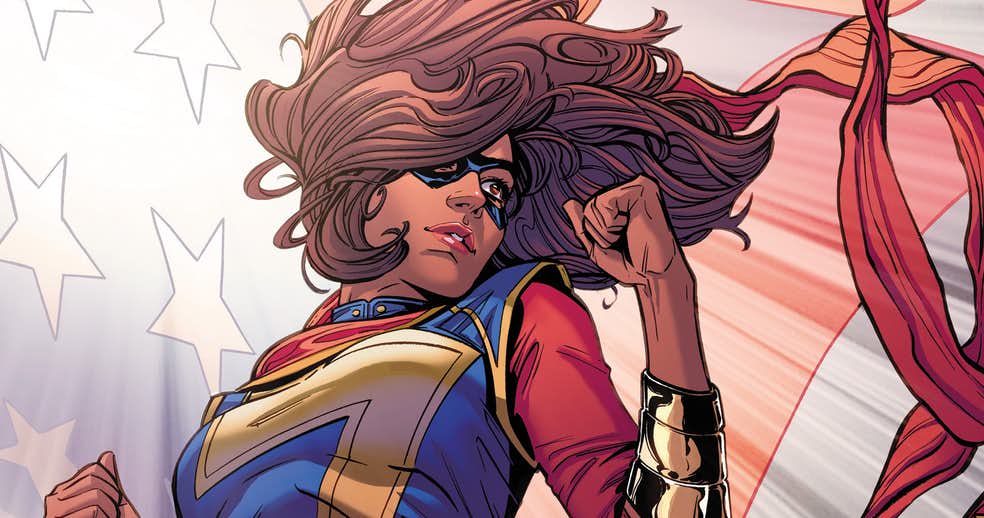 Teenage heroine Kamala Khan was still in high school when she took up the mantle of Ms. Marvel after Carol Danvers started going by Captain Marvel. While walking back from a party she was blanketed in the Terrigen Mist, waking up to discover that she was a polymorph giving her the ability to transform into virtually anything.

Kamala made waves as Marvel’s first Muslim portrayed superhero and she’s roughly about the same age as the new Spider-Man. Giving Marvel an ideal place for her to feature in. In the comics she and Spider-Man together with another superhero Nova they join The Avengers. It’ll be fun to see a group of younger Avengers in the works as well as an introduction to more superheroes that Spider-Man can relate to. 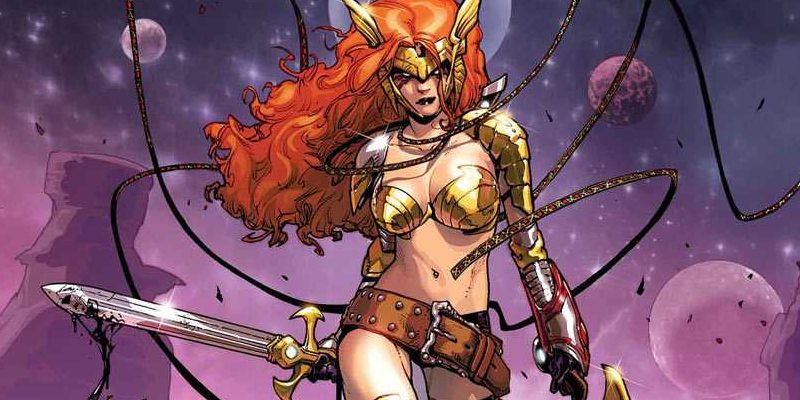 Sister to Thor and daughter of Odin (not Hela), Aldrif Odinsdottir aka Angela has the powers of immense strength, speed, and flight. She’s a master of hand to hand combat. Firstborn of Odin and Freyja she was the heir to the Asgardian throne. When Heven waged war on Asgard, the Queen of Angels kidnapped Aldrif in an attempt to blackmail Odin into surrendering. He refused, and the Queen seemingly killed Aldrif before fleeing.

After the Queen of Angels ordered the corpse of the baby to be disposed of, the queen’s handmaiden Loriel, who was tasked to do this, discovered it was still alive, and raised her as one of the Angels under the name of Angela. She first makes her appearance in Midgard in the Guardians of the Galaxy which might be a fun place to start her off in the MCU as well. 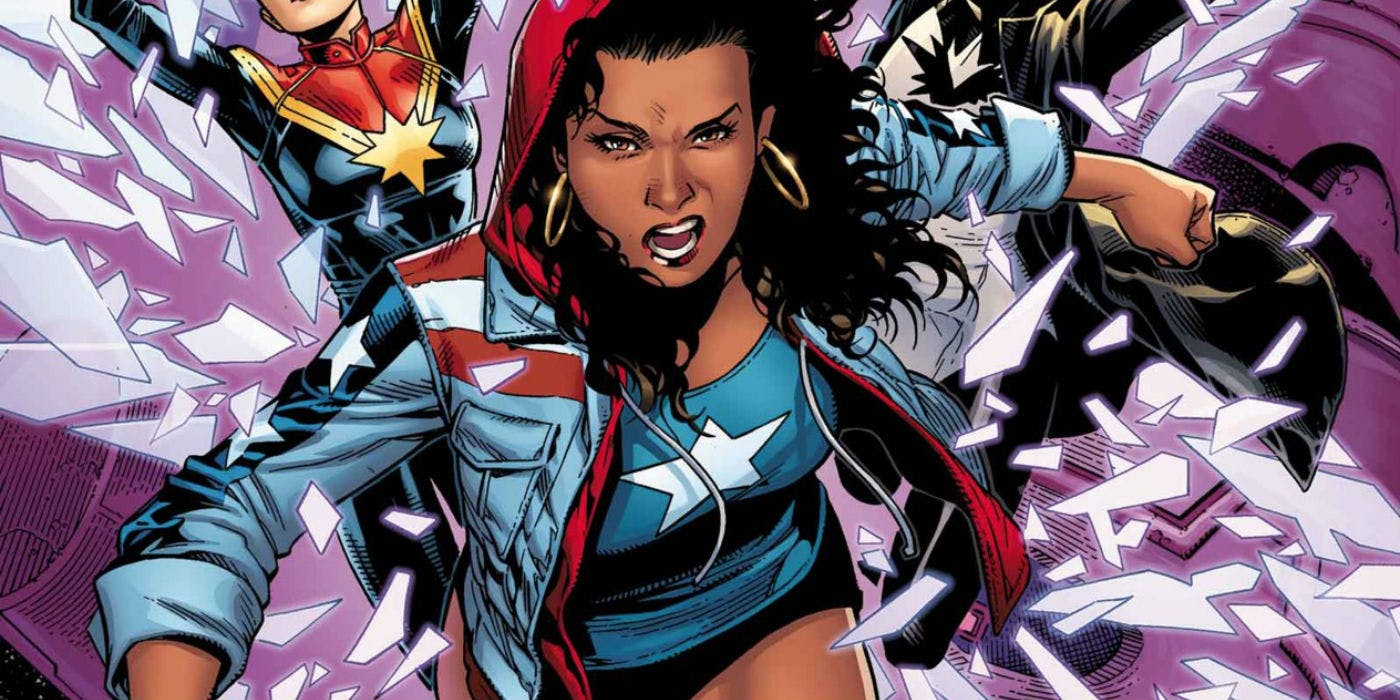 Another young woman of colour and Marvel’s first LGBT heroine hits the list with Miss America. Our young orphan America Chavez was raised by her mothers, Amalia and Elena Chavez, in the Utopian Parallel, a dimension out of time and in the presence of the Demiurge. America appeared to have inherited or absorbed some or all of her superpowers from the Demiurge‘s ambient magical presence.

Her powers, a bit more Doctor Strange than Captain Marvel, gives her super strength, the ability to fly, move at super speed and travel across different dimensions by literally kicking open holes in reality. Allowing her and her teammates to travel through the multiverse and into other realities.  In the complicated continuity of a cinematic universe like Marvel, this could afford the creative forces behind these movies to explore the multiverse in ways that we haven’t seen yet and build off of the multiverse. 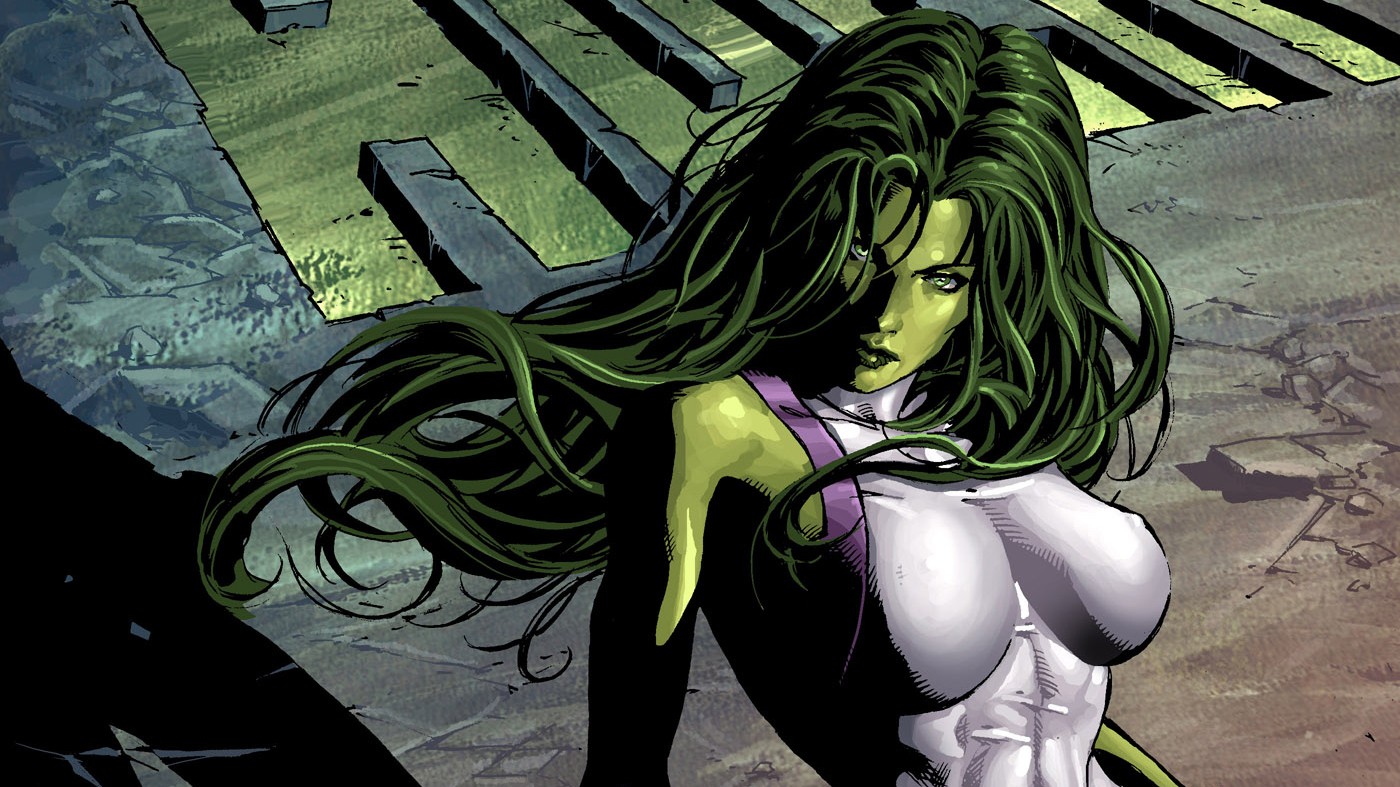 There are a number of iterations of She-Hulk in the Marvel Comicverse, including Lyra from Earth 8009 who is the daughter of Bruce Banner, Betty Ross who turns into the Harpy for a bit, marries Bruce Banner, injects herself with Hulk serum and eventually dies and is resurrected as Red She-Hulk (it gets a little complicated) and Jennifer Walters who is Bruce Banner’s cousin who gets her powers from an emergency blood transfusion with Banner.

Jen Walters is a high profile New York lawyer and unlike her cousin has the ability to change into her She-Hulk form on demand while retaining her intellect and disposition during the process. She-Hulk has served as the legal counsel for a large number of heroes over the years, and her introduction could help bridge the gap between the street-level Defenders heroes and The Avengers ensemble. 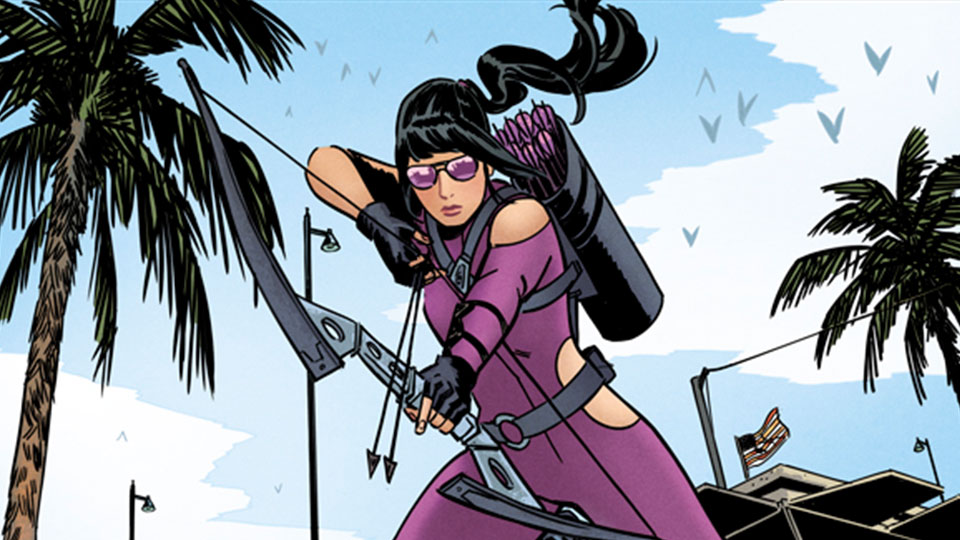 Katherine Bishop is the youngest daughter of some wealthy Manhattan socialites, when she was younger she got kidnapped and saved by The Avengers, eventually turning Hawkeye into her role model. Later on after getting sexually assaulted she was motivated to learn several forms of combat and eventually became proficient in swordplay, archery, and martial arts.

Kate crosses paths with the Young Avengers at her sister’s wedding when they try to save them and eventually joins them to defeat Kang the Conqueror and take up abandoned codename Hawkeye After the events of Avengers: Infinity War I wouldn’t be too surprised if Clint Barton hung up his bow giving Kate a great starting point as well as paving the way for the introduction of the Young Avengers. 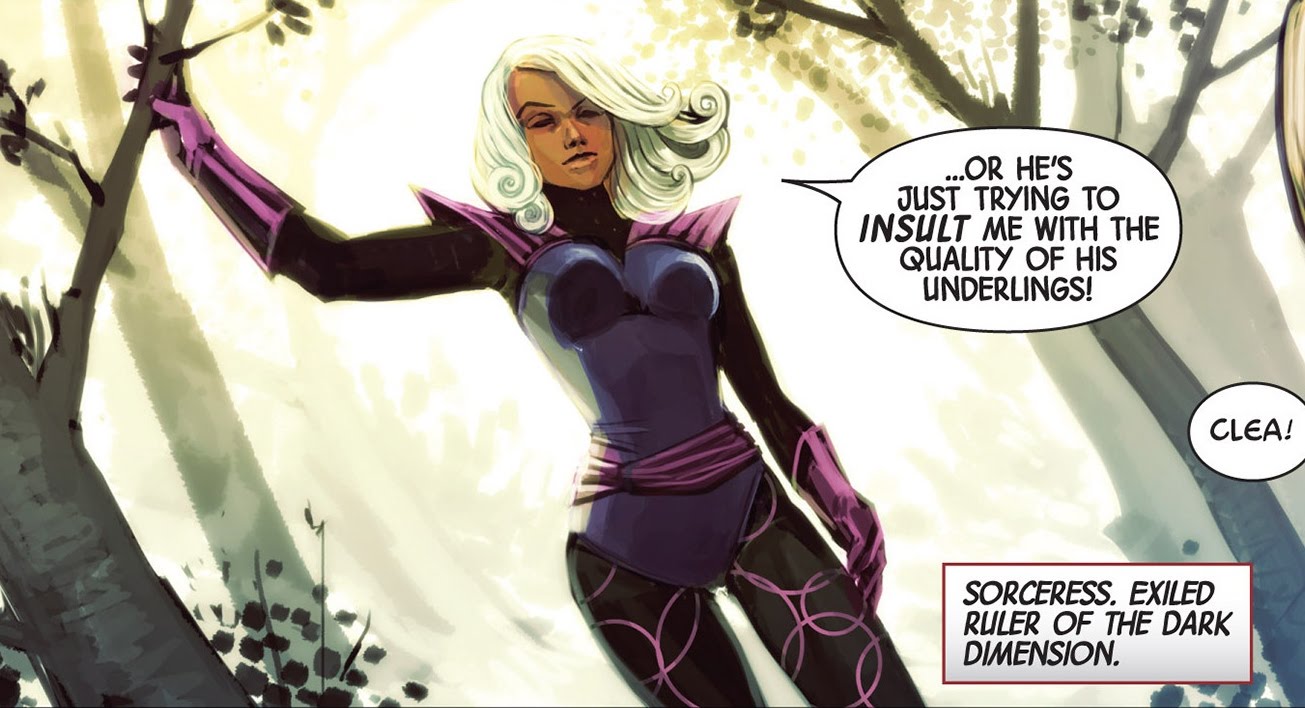 An ideal heroine for Doctor Strange, Clea is Sorceress Supreme, Princess and heir of the Dark Dimension. You remember all that bargaining with Dormammu in there, yup he’s her uncle. Dormammu had long sought to conquer Earth and, as a result, often confronted Earth’s defender, Doctor Strange. When Strange journeyed into the Dark Dimension to continue his battle against Dormammu, Clea initially sought to dissuade Strange from facing him before deciding to eventually help.

The eventual romance between Strange and Clea leads him to teach her in the ways of the mystical. She joins him on many of his adventures and eventually becomes a part of the Defenders. She’d be a welcome addition to Doctor Strange 2.

If Marvel could take a break from rebooting Spider-Man we’d eventually have time to see Spider-Woman. The female counterpart of Spider-Man, Jessica Drew is a mainstay in the Spidey corner of the Marvel lore. However, unlike the nerdy Peter, she is a master spy who has had affiliations with a wide variety of organizations, including S.H.I.E.L.D., S.W.O.R.D., HYDRA and The Avengers.

When Jessica became ill due to prolonged uranium exposure her father injected Jessica with an untested serum made with the blood of several uncommon species of spiders, in the hopes of stopping the tissue damage and immunizing the girl from the uranium radiation in her blood. Giving her superhuman strength, speed, durability, stamina, agility, hearting, venom blasts and all that good spidey stuff.

Recent rumors related to Spider-Man: Homecoming 2 have suggested that we may actually see Jessica Drew appear as a supporting character, so the odds of Spider-Woman showing up to sling some webs alongside Tom Holland’s Peter Parker actually seem pretty good at this stage of the game.

Marvel’s answer to Wonder Woman, Thundra is a powerful Amazonian-like warrior who lives in an alternate 23rd century where Earth, is now known as Femizonia. Femizonia is ruled by Amazon-like female overlords or Femizons who have conquered and enslaved the diminished male population. Thundra is the United Sisterhood’s (formerly the United States) most formidable warrior, having been physically enhanced by genetic engineering and trained from childhood in combat, the martial arts, and military strategy.

Upon accidentally displacing herself out of her dimension Thundra joins up with the Fantastic Four. Another god-like deity if Thor doesn’t get his contract renewed we could see ourselves watching what will definitely be some very notable ass kicking with Thundra.

So there we go our awesome kickass list! Who are you looking for to see in the Marvel Cinematic Universe?