SteamWorld Dig 2, Can You Dig It?

SteamWorld Dig 2 builds upon developer Image & Form’s growing SteamWorld universe and is the first direct sequel in the series. Although the game shares the first title’s core gameplay of digging down and exploring caves. There are a few tweaks change the game’s flow, ultimately for the better.

Taking place after the first SteamWorld Dig, the game follows Dorothy. A robot shopkeeper who has taken it upon herself to discover the source of the mysterious earthquakes plaguing the steampunk, robotic city. All while searching for the missing protagonist of the first game, Rusty. During her adventure, she meets Fen, a sprite with electric properties and an attitude. Together they delve into the treacherous underground.

As in the original, SteamWorld Dig 2 revolves around digging through penetrable layers of dirt and rocks with your trusty pickaxe. So that you can progress further down the long, vertical cave. Think of SteamWorld 2 like an adventurous version of Dig-Dug, where you excavate a large, mostly interconnected mine. I say “mostly” because the map is actually split up into about three different areas, which is slightly disappointing.

Along the way, you can mine and collect gems to sell for upgrades back at the city. Provided you don’t die and lose half your loot before then. Occasionally, you also find new powerups such as the ability to dash or use a projectile pressure bomb, allowing you to explore further. In other words, it’s a Metroidvania experience. One additional touch is that tools now have special abilities that you can turn on and off by inserting the appropriate number of collectible cogs, sort of like how Paper Mario’s badge system works. You can select which hazards you’re resistant to as you upgrade your armor. Or choose which resources are likely to spawn when I power up my pickaxe. The new skill customization delivered satisfying in-depth progression, and it encouraged me to seek out the numerous well-hidden cogs. 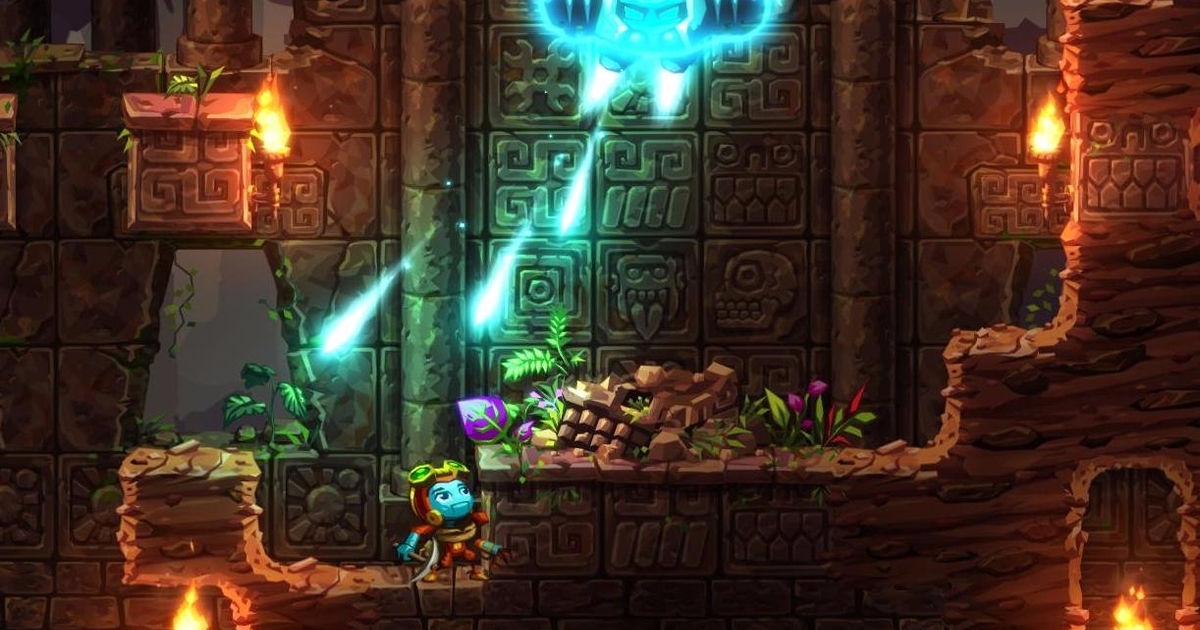 The biggest difference from the original is that while the first game featured procedurally generated caverns. SteamWorld Dig 2 has a clear, consistent level design a change that leads to big differences in gameplay. First of all, the underground map is more cohesive and has more clearly defined pathways. Lowering the likelihood of getting lost or stuck without a way back up. Additionally, there are more open spaces and distinct locations to traverse, compared to the original’s dull claustrophobia-inducing dirt-covered world. These areas are imbued with puzzles and challenges, giving this even more of a Metroidvania sensation as opposed to a loot-based mining game. 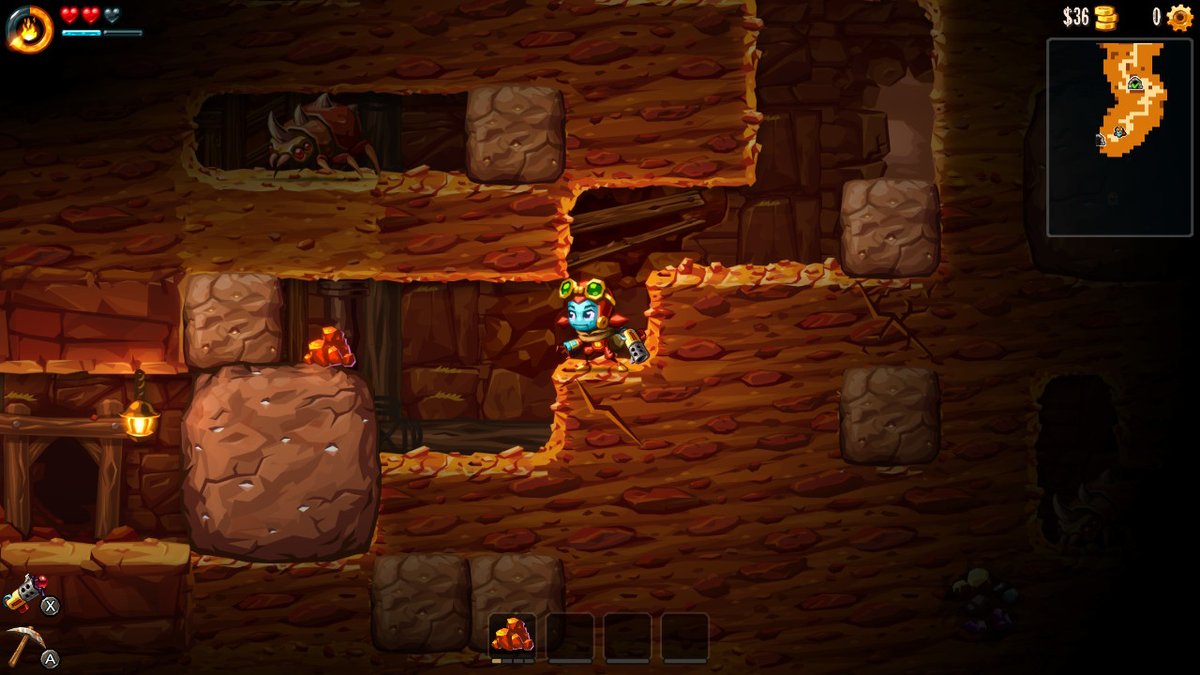 I enjoyed these open temples and caves, thanks to their expertly designed challenges that tested my item mastery. One scenario had you hookshot from wall to wall to avoid touching dangerous switches. Another had you blow up boulders to create stepstools. I grew to appreciate how tight the tool control was. I was very impressed and pleased by SteamWorld Dig 2’s more pronounced focus on platforming and environmental puzzles. As well as the bigger emphasis on stage elements like bouncy mushrooms and fire-powered golems.

On the contrary, as a result of the shift in gameplay, SteamWorld Dig 2 loses some of the original game’s charm. In the first SteamWorld Dig, the digging mechanic complemented the randomly generated world. With the feel of you carving out your own custom path. With the preset pathways in the sequel, the exploration feels less organic. You’re not creating a path, but rather, following one. And as a result, digging through hundreds of blocks isn’t as fulfilling and instead, feels tedious. I’m not saying that I hate the mining segments, but they were better implemented in the original. Here, they’re more of a means to reach the next destination. 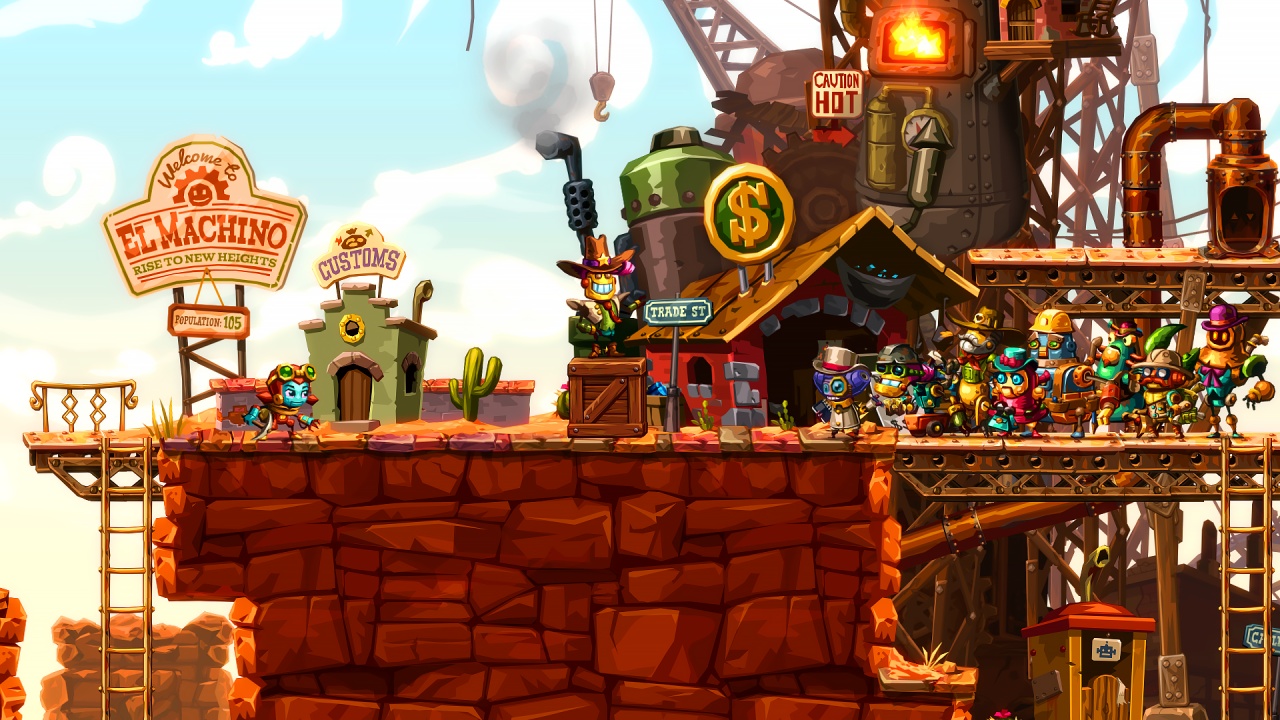 Since you’re largely limited to very short range weapons like your pickaxe, combat ends up feeling clunky. Especially when most enemies rush at you or fire projectiles. But you can’t fault the game too much on it since it’s more of an adventure than a proper action game. Tough it is consequently annoying to run into foes. I have to say the bosses are enjoyable, at least, which was more about dodging bullets and exposing weak spots as opposed to close combat. It’s a shame that I can count the number of bosses on one hand. A few more encounters would have been great.

Overall, SteamWorld Dig 2 is short. I clocked in at five hours to beat it, but you could easily spend more time if you seek out all the secrets, fill out the map, and obtain all upgrades. The adventure shines brightest once it opens up and lets you visit anywhere with all major powerups intact. It was a joy to find hidden passageways, and I appreciate that caverns were only checkmarked if they were 100% complete. 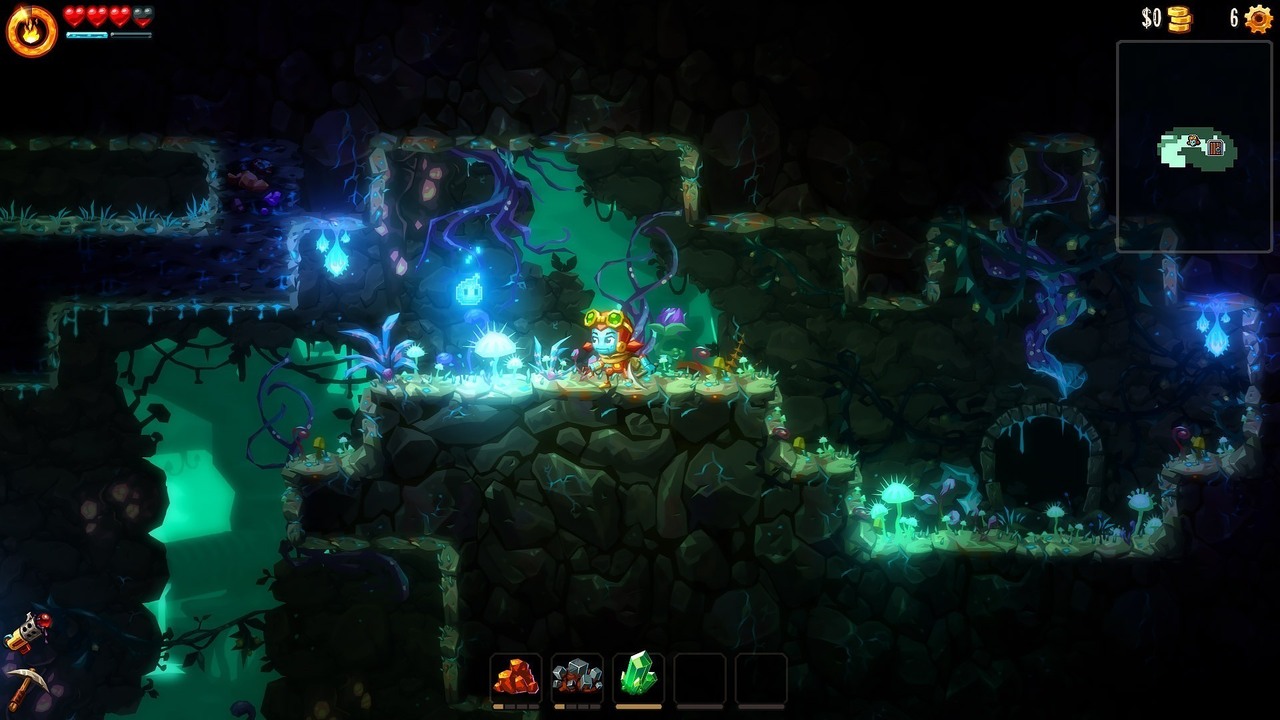 The visuals are very fluid and well-animated. The steampunk robots, or Steambots, have a special charm to them; their robotic mumble and facial expressions convey their personalities well, despite no voiced dialogue. Additionally, the world, both above and underground, is very colorful and stunning, highly improved over the first game. And there are more distinct locales, including a fire temple and a poisonous jungle, which are far cries from plain old dirt. The mix of soft western riffs and the ambient music fits well but easily fades away into the background. Though I did love the main town’s theme, a wind-heavy track that sounds like it came out of Donkey Kong Country.

SteamWorld Dig 2 is a sequel that does more than simply update the original. It creates a larger world structured like a Metroidvania by adding more mazelike corridors and open rooms. On the flip side, the digging segments feel more tedious this time around, especially when compared to the excellently designed challenge caverns and environmental puzzles. Regardless, the constant progression loops and enticing upgrades carry SteamWorld 2 along, keeping the adventure interesting. And the prospect of uncovering the secret truths underground remains alluring throughout. If you enjoy games like Metroid, you’ll likely dig this game.

SteamWorld Dig 2 is out now on PC, Mac, PlayStation and the Nintendo Switch.