10 Horror Mods To Scare You This Halloween

The glory of Halloween has finally arrived, which means an unrelenting onslaught of spooky Halloween reminders. Sometimes that’s a tall order on the gaming front. But those who are willing to try diving into the mod community will find that nearly any game you can think of will have some kind of scary mod attached to it.

From truly scary total overhauls that add in completely new storylines to silly pumpkin skins simply added for aesthetics, there’s something for everyone when it comes to Halloween mods.

The only appropriate response to this overhaul mod is a simple Keanu-Reeves-inspired, “Woah.” Pilgrim — Dread the Commonwealth drastically changes Fallout 4‘s tone by changing up the game’s color filters and weather, creating a dreary and gritty atmosphere inspired by horror flick The Witch. But that’s not all. Everything gets a creepy remake here, from the terrain to faithful hound companion Dogmeat (who, for now, is just a bit scarier version of his current self. However, in a future update, he will be replaced entirely with the Satanic goat Black Phillip).

For the best scary Fallout 4 experience, combine Pilgrim with the smallest setting on the Pip Boy Flashlight mod and install the Commonwealth Connifers Redux mod for a more forested feel in line with the movie.

One-half survival simulator in the vein of PUBG or Battle Royale and one-half post-apocalyptic horror game. Obscurum Pandemic is a total overhaul of Fallout: New Vegas in the truest sense of the term. This is an entirely different experience than what you normally get playing as the courier. The character creation and leveling processes have been radically altered, all the vanilla NPCs are gone, new warring factions are added, and monsters galore have now invaded the New Vegas wasteland.

This mod will make you wish you’d never left the Vault.

If you only get one Halloween-themed Skyrim mod this year, this is unquestionably the one to get. It’s got everything all in one bundle: new quests, new locations, and new skins. To top it all off, there are even pumpkin and Halloween light decorations placed everywhere to complete the vibe.

Sadly, this mod isn’t compatible with Skyrim: Special Edition, and it takes a little elbow grease to get working in the vanilla game because it’s actually three different mod install files instead of one. But the results are well worth the work. On the plus side, more content and updates are added every year, with the 2017 additions being worked on as we speak.

This latest jaw-droppingly awesome mod recreates the first Resident Evil inside Skyrim. Yep, all of it — even the dogs jumping through the window in the hallway. Although changes have had to be made to fit within the Skyrim framework, even some of the puzzles and traps have been recreated. Seriously, just get to downloading this one already. 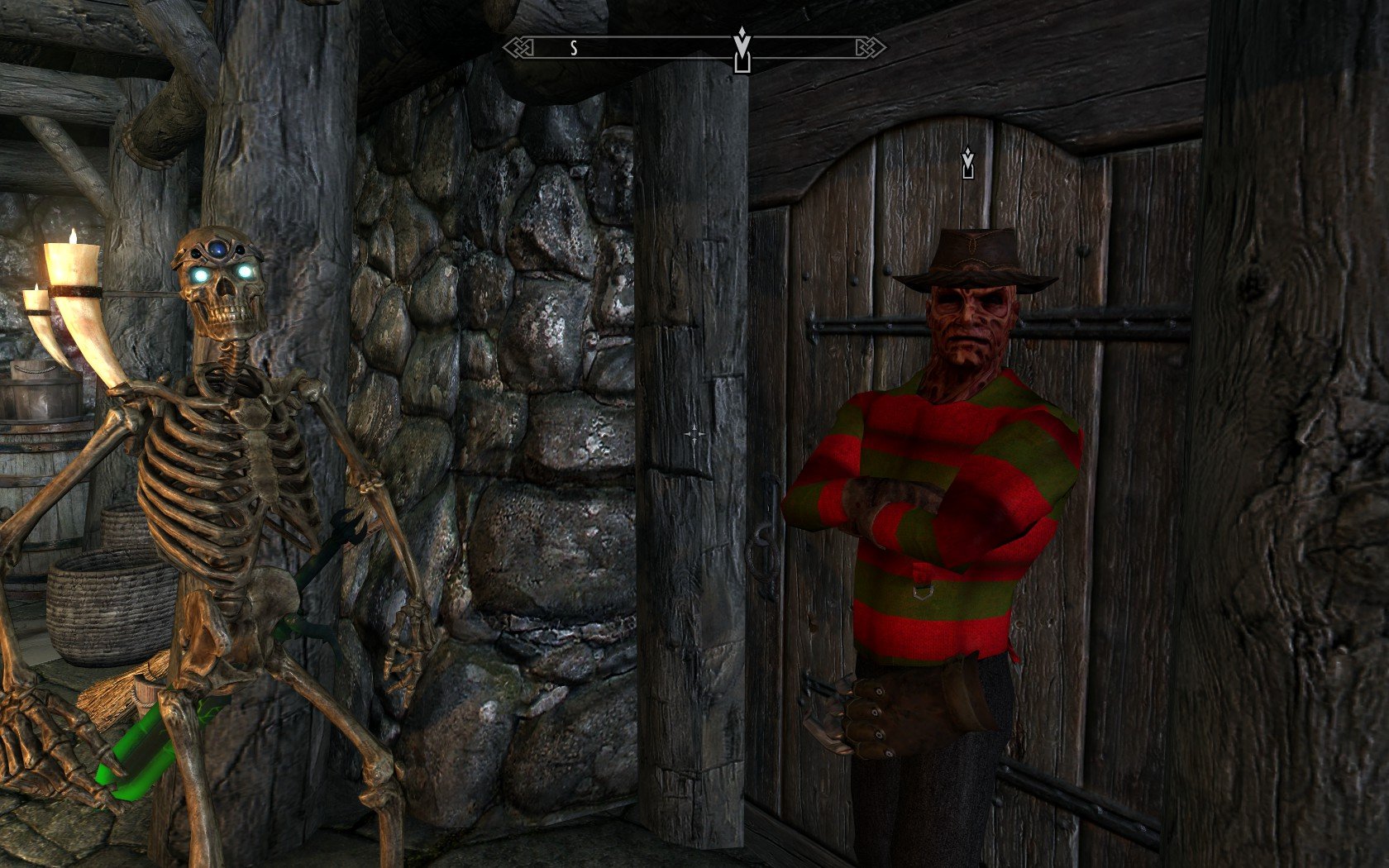 The illustrious Skyrim modding community has added in characters from so many other franchises that I doubt I could even find them all in a full day of searching — let alone download and install even a fraction of them. But that means that horror- and Halloween-themed characters most definitely have not been left out, with the Headless Horseman and many other figures from myth and legend added to this open world fantasy game.

However, one of the most bizarre (and kind of amazing) has got to be Freddy Krueger. I mean, someone clearly put a lot of work into this mod, even if it doesn’t fit the game at all. It has nothing to do with Skyrim and is beyond lore breaking, but it’s also pretty awesome. Go ahead and kill Freddy, loot his dream chest, and become the clawed nightmare yourself!

Crysis: The Worry Of Newport

This one deserves major kudos for drastically changing the Crysis base game. Shifting it from a sci-fi action shooter to an atmospheric Lovecraftian horror game that’s slow moving and all about investigation rather than running and gunning. The Worry Of Newport mod is much more focused on narrative and horror overtones than fast-paced gameplay. So if you dig the idea of playing through a book (or enjoy games like Myst and the 7th Guest, just scarier), this is definitely one to try out.

Somehow, Slenderman has even managed to sink his fingers into the already-insane world of Goat Simulator. Everybody’s favorite dumb, time waster. This mod puts you in a dark survival mode, with a Slendergoat chasing close behind. Couple it with the Goat Simulator first-person mod and you’re basically playing Slender: The Arrival, just with a goat who has no bones and can fly.

Five months of painstaking work went into creating this map, and man does it ever show! Some insane Minecraft fanatic recreated the legendary Silent Hills P.T. playable demo to inject some serious horror into the block building, open world phenomena.

The pounding on the doors. The radio text. Absolutely everything from the (sadly) canceled Silent Hills demo has been lovingly recreated in pixelated form. We might not ever get the full game, but this mashup experience is a nice consolation prize.

Here’s an intense mod list for you to transform your Steam library ready for Halloween!

10 Upcoming Games To Wishlist If You Love ARK: Survival Evolved