Yonder: The Cloud Catcher Chronicles, A Gorgeous RPG With No Actual Combat

Yonder: The Cloud Catcher Chronicles lets you set sail to the beautiful land of Gamea. A peaceful land full of changing seasons, diverse weather patterns, with gorgeous and diverse landscapes. For those that want to kickback with a Zeldaesque title minus any stress, enter Prideful Sloth’s debut title. Yonder: The Cloud Catcher Chronicles is one of our Top 10 Games Coming Out This July and soon you’ll see why. 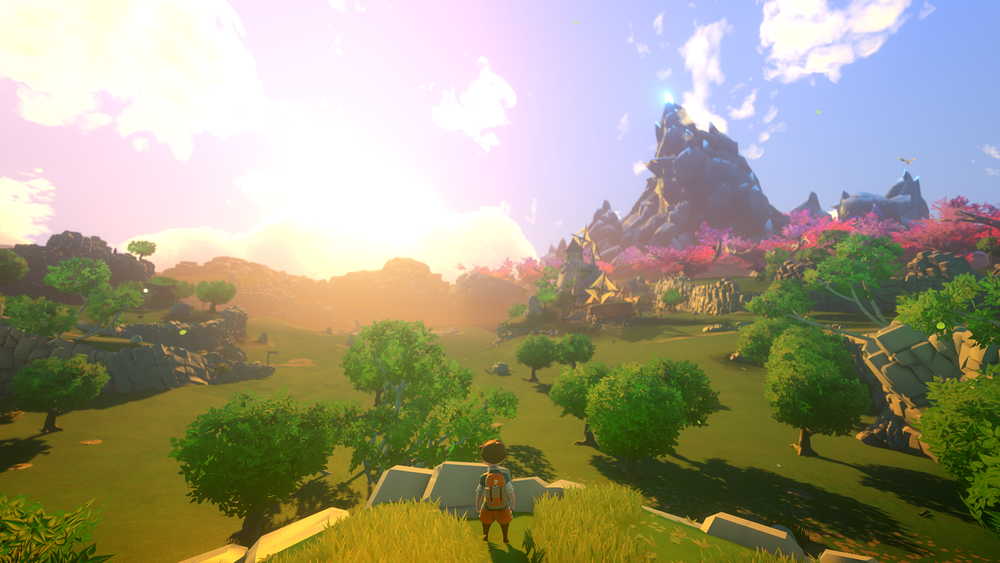 Yonder: The Cloud Catcher Chronicles differentiates itself from the ordinary RPG with no actual combat. Instead, you explore the open world of Gemea and release little creatures known as Sprites, who will help you on your way to repairing the Cloud Catcher. While exploring, you can fish, collect materials, craft and adopt livestock for your farm, as well as pursue the main story quests.

In 2001, Peter Molyneux promised that in Fable, you could plant an acorn, and later in your character’s life, that acorn would grow into a tree. Famously, that did not happen, nor did it happen in Fable II, some seven years later. Enter Yonder, which while not produced by Peter Molyneux, does, in fact, let you plant an acorn, only to come back in due time to find a fully sprouted tree.

You start your journey on a boat to the mysterious island of Gemea. Suddenly, you enter a storm and are spirited away directly to the island, where you arrive at the town of Fairmont with only a compass to point the way. While there, you are given a few tools to help you with the basics of the game, such as a mallet for breaking stone and a scythe for cutting grass.

In the opening scene, a boat crashes ashore the lost island of Gemea during a storm. Where you’re spirited away directly to the island, to arrive at the town of Fairmont with only a compass to point the way. 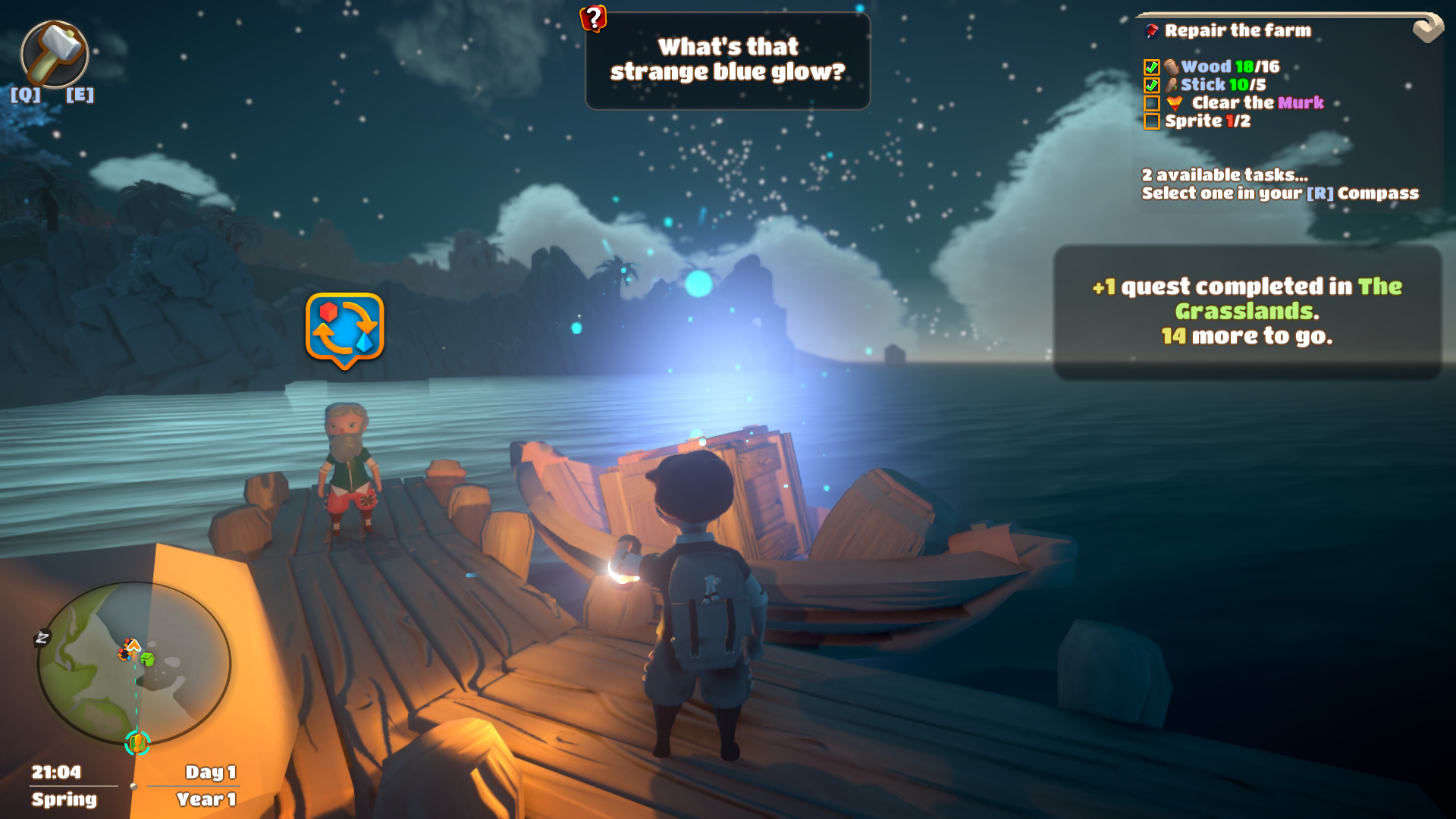 With gentle orchestration moving the slim storybook-like tale forward, Yonder’sinnocence is undeniable. With no “game over” screen or death state. Prideful Sloth instead allows you the autonomy to explore and discover. While Gamea is hardly a realm flush with surprise, seeing the sights, mingling with animals (even befriending them with food), and helping rather than harming this aesthetically delightful world feels right. Planting seeds to grow trees – eventually a game-wide quest – also makes wildlife easier to befriend — and, hopefully, make them part of your farm. Tend to your farm animals and their milk is then available to trade for items. 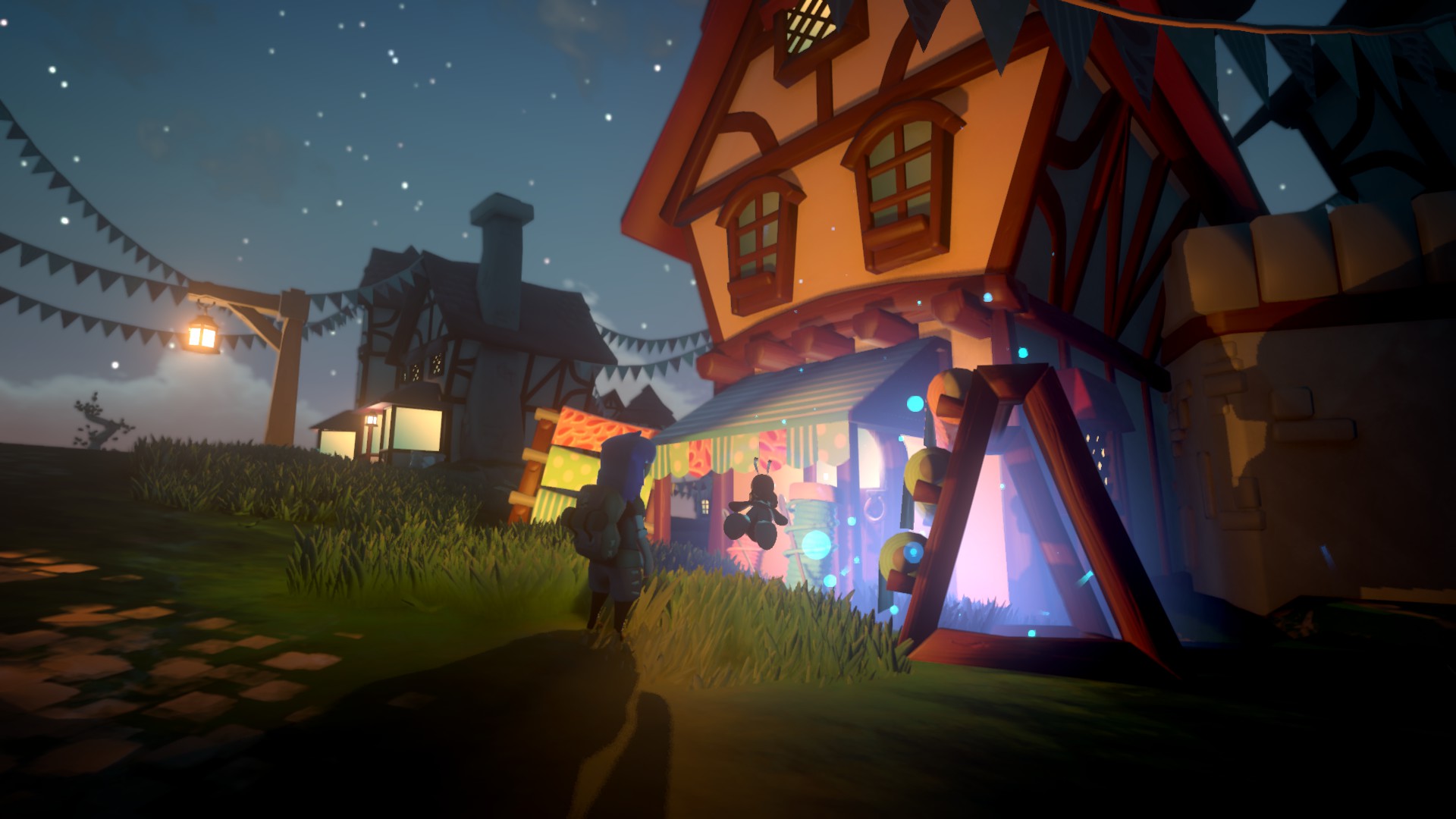 The world is vast from the first moments of the game, but some areas are blocked off by purple areas known as Murk. An ambient antagonist, Murk, is an identity-less, purplish dark aura, covering specific locations on the island. It never speaks or harms anything, which for Yonder is a tonally appropriate villain. Only requiring a certain number of sprites to be cleared up.

To be free from frustration with Yonder’s mellowed pacing is a unique gift. Without the tangles of leveling, almost nothing in Yonder ties into anything else. The different elements of the story, farming, and random adventuring exist as separate elements. You can gleefully explore without farming, or farm without touching the story.

Yonder is essentially just the side elements you’d find in an RPG but this works to the game’s advantage, as it taps into the part of your gaming psyche that wants the immersion and relaxation of the fantasy world without the combat.

When compared to similar crafting and farming sims like Stardew Valley or Animal Crossing, the game doesn’t get tedious or repetitive without that crippling mortgage to pay, there’s no pressure to rush through the world.

Out now on Steam.