In a wise move on the part of Bandai Namco, Gundam Versus will have a month-long online beta test in Japan starting this June.

The beta test will be via a demo available on the Japanese PSN store and will operate from June 1 until July 1. The beta test will also operate for an hour each day, from 9:00 pm until 10:00 pm Japan time. Players will have also access to 51 mobile suits in the demo, which is pretty good going really.

Finally, we have a new mode breakdown trailer for the game. This covers the majority of the modes we are used to seeing in the series, such as free battle and missions, but we also have a horde mode type now.

My only concern here is that this beta test is currently only available in Japan. Admittedly, Western players with Japanese PSN accounts can still join in but I imagine the number of those that will do that will be quite small. The issue is that Japanese broadband speeds are insanely fast and stress testing the online multiplayer here might overlook issues prevalent in other parts of the world. So I hope that Bandai Namco will roll out a similar open beta test, once the game nears its Western release this fall.

In other news, Bandai Namco also announced that the Western box art for the game has been finalized…and it is the same as the Japanese standard boxart. So for all of those that didn’t vote for the Nu Gundam and Unicorn cover, then this is all on you. 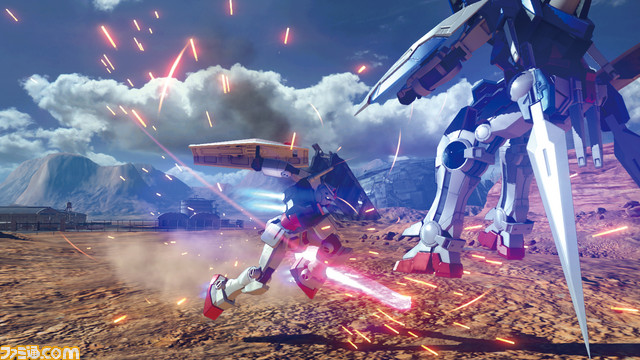 This new Ultimate Battle setup has players go up against wave after wave of enemies, with certain stages featuring gigantic bosses as well as 3 versus 3 matchups. The online modes will only have casual and player matches at launch, with ranked matches added in a later patch.

What’s more, we also now know that the game will indeed have paid DLC with the first of these being the Gundam Barbatos Lupus from Iron-Blooded Orphans. While pricing is not yet known, if players buy the Premium G Sound Edition of the game they will get the unit for free at launch.

Gundam Versus is released in Japan for PS4 on July 6. It will also receive a Western release this fall.