Rain World Is A Unique And Beautiful Slugcat Dystopia

Rain World is a strange game. You play as a nomadic slugcat, a white creature with a long tail and grippy hands. That has been separated from its slugcat family. They lived a perfect life in a terrible industrial, post-apocalyptic hellscape. The opening cinematic shows a catastrophic rain that appears. Sweeps the player slugcat away from its family and casts it deep into the earth. The game is about getting out of this world, going somewhere else, and trying to recapture the warm cuddly feelings that appear in dreams throughout the game.

It’s hard not to be charmed by Rain World. The first images that I saw of the game a few years ago made me deeply curious about what this kind of game would be. Was it a platformer? Or was it something like Metroid or Castlevania? However, upon playing, I realise that trying to fit it into a traditional game genre (or even suggesting that it is a SomeGame-like) does it a disservice. Rain World is wholly its own unique creation. 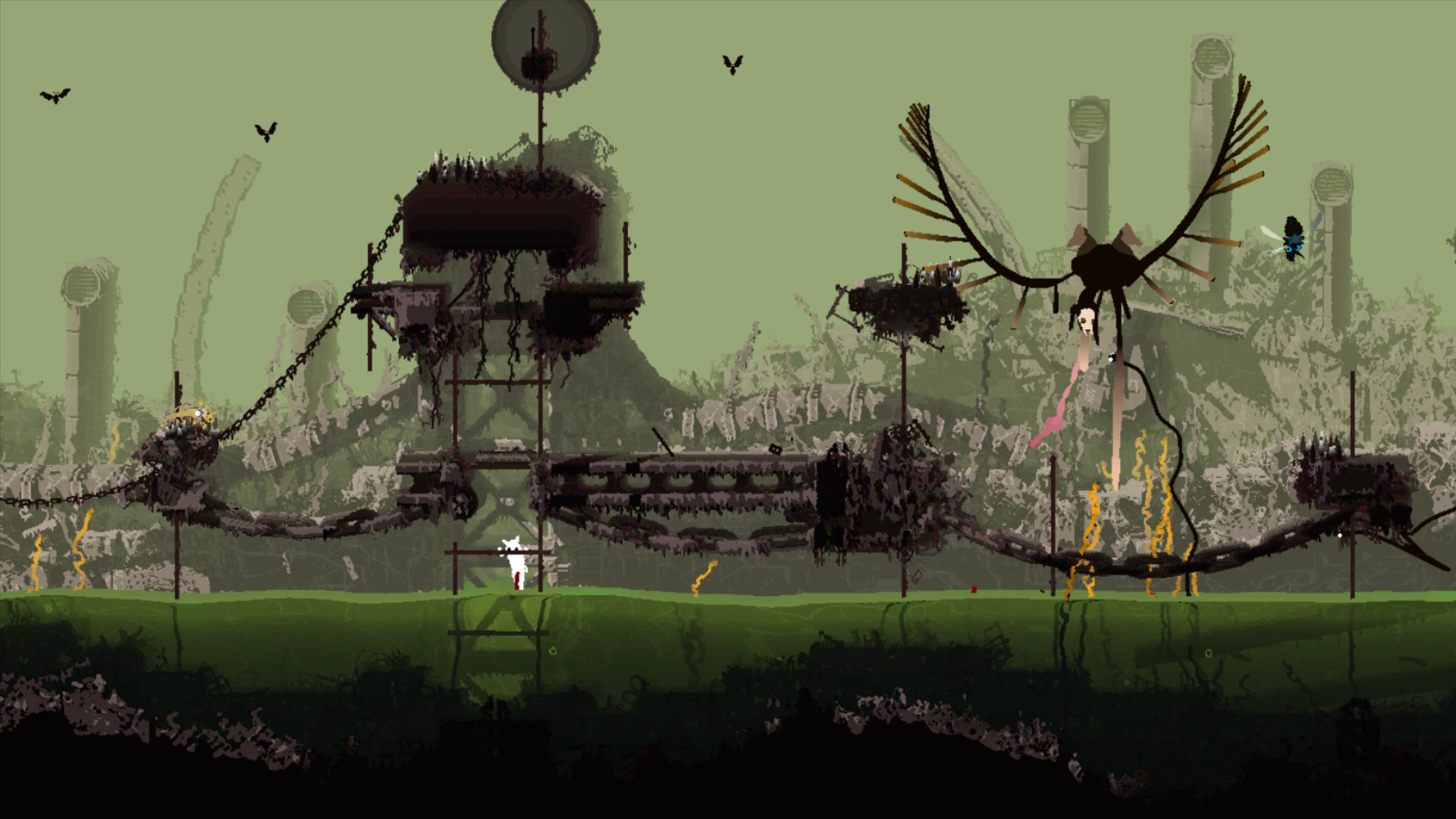 Rain World is, theoretically, about exploring and making your way out of a polluted hell. It is about entering new areas, seeing what the game wants you to do there, and figuring out how to do it. For the most part, this is dependent on a couple different core mechanics.

The first centers around food and hibernation. The slugcat can eat smaller animals and fruits in order to fill up its weird little stomach before hibernating. After it hibernates, it attains “karma points”, unlocking new areas. Being killed by the various animals and plants that prey on slugcats takes a karma point away. Entering an area, scoping out the creatures that prowl through it, and locating the food becomes an all-consuming focus.

My lack of ability really comes into play during the other core part of the Rain World experience: the micro-movements. In games like Starcraft II, players distinguish between macro (economic management and base creation) and micro (the tactical control of small groups or individual units). Being a good micro player is hard because you need intensive knowledge of how units move. What their abilities are, and how they counter specific other enemies. My experience with playing Rain World is very close to that of fighting enemy armies in Starcraft II. I had to fill my small grabby hands with rocks and spears, learn to climb across wires and bars, and figure out exactly what my short and long jump distances were. 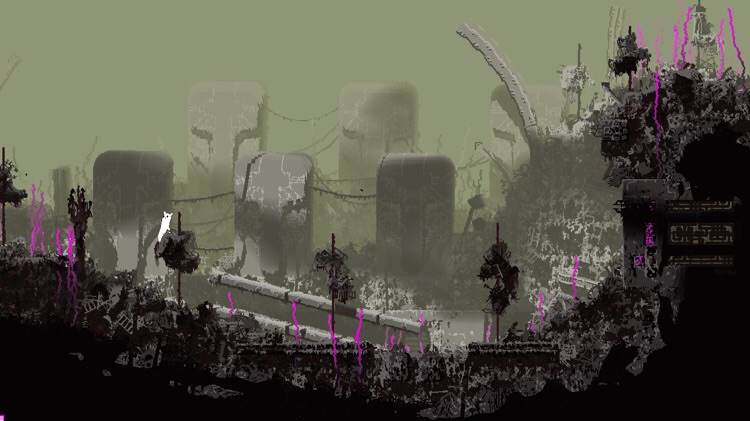 None of this is weird for a game of this type. To get good at a game, you have to learn new skills. But the specificity of control that you need to master to be truly good at Rain World is closer to a Devil May Cry game than it is to Spelunky. The kind of subtle controller movements that the game requires are profoundly frustrating and unforgiving. These fine-grained controls are also paired with a save system that is incredibly punishing. I spent a couple play sessions grinding out levels and exploring new areas. Only to die and have all of that exploration rolled back to the last place that I hibernated (acting as both a save point and level-up zone). 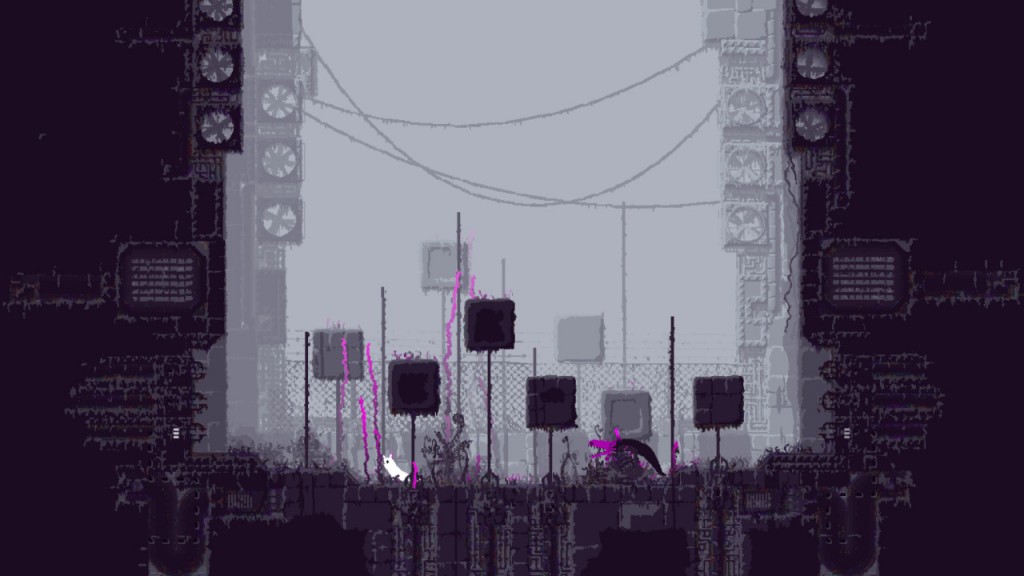 Rain World has a lot in common with Hyper Light Drifter. In that, both lean heavily into their difficulty and neither have much interest in telling you what to do at any given time. Drifter, in following a Zelda-ish format, basically gave you four “wings” of the world that told you to defeat bosses there. Rain World is slightly more linear than that, but it also is much less clear about what its expectations are for you. There was a point in the first couple hours where I had to learn to throw a metal spear to create a platform. I honestly just figured it out by accident. I felt that way about a lot of “discovery” in the game.

There are people who are going to love that kind of thing, and Rain World is absolutely for them. It is a highly difficult game that is probably incredibly rewarding for those players who want to manage micro-movements and oblique hints. Rain World is a beautiful, forward-thinking game that points to a form of game design that I want to see more of. I just wish it made itself a little more accessible.

Rain World was developed by Videocult and published by Adult Swim Games. It’s out now on Steam and PlayStation 4.