‘Halo Wars 2’ Everything You Need To Know

Halo Wars 2 was announced at this year’s E3. It’s the highly anticipated sequel to the 2009 RTS game, that introduced players to a new way to play Halo. For those of you that can’t wait until its launch in 2017. Well here’s everything you need to know.

Creative Assembly, the studio behind the Total War series and Alien: Isolation, will be working on the game. And is expected to debut on February 21, 2017 for the Xbox and PC. Check out the latest trailer below.

The trailer shows off the game’s surprisingly strong narrative. This could be a story worthy of the upcoming RTS’ source material. We knew developer Creative Assembly would be applying their considerable gameplay talents to the next Halo Wars. But it appears that this sequel will also sport a much more impressive cinematicside as well.

This Halo Wars 2 story trailer from Comic-Con shows that even Spartans can get in over their heads. By examining just how powerful the game’s villains truly are. It’s a haunting message that certainly brings to life the words of 343 Industries’ Dave Wilson who said during the game’s Comic-Con panel: “One of the things we were focusing on early was something for these superheroes to bump up against. Something to fear.”

After decades adrift and declared “lost with all hands”. The brave crew of the UNSC Spirit of Fire are mysteriously awoken above an ancient Forerunner haven known as the Ark. Captain Cutter and his crew will face one of humanity’s most formidable threats yet: The Banished – a fierce and powerful Brute faction led by a cunning and lethal warrior known as Atriox.

The Banished, are a splinter group from the days of the Covenant. Mostly made up of Brutes, it seems, but there are also glimpses of more traditional Covenant forces, such as Elites.

Skirmish: Test your battle strategies against a range of AI difficulty levels. Fight across all the environments and multiplayer game modes with as many AI and co-op friends (or enemies!) as each mode will allow.

Strongholds: Strongholds is a fast-paced, timed game mode where the objective is to control more bases than your opponent when the timer stops.

Domination: Domination offers the classic RTS gameplay of Halo Wars, now with all the new units, leaders, special abilities, and depth of Halo Wars 2. Build your base, build your army, and battle for control of the map and supremacy of the Ark!

Deathmatch: In Deathmatch you’ll plan and build your base and army, but instead of fighting for map control you’ll fight until only one player remains standing. Outthink and outflank your opponents, then have a celebratory barbecue on the smoking remains of their home bases.

Blitz: An all-new multiplayer mode that is an exciting addition to the Halo Wars series with a unique approach to RTS gameplay.

Since no modern game is complete without a built-in card mode. Developer Creative Assembly has confirmed their intentions to bring a little CCG action to Halo Wars 2. 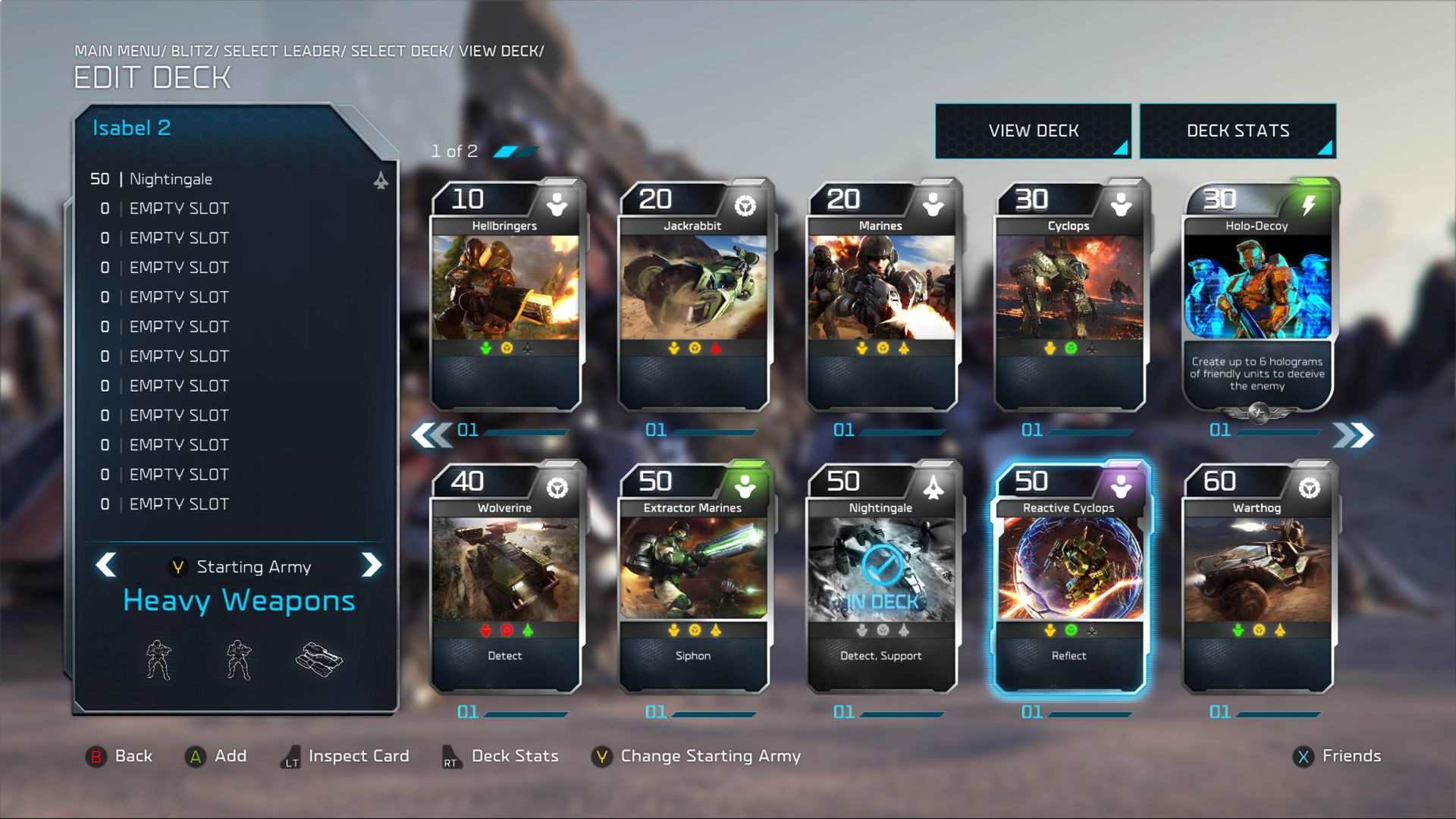 The new mode is called Blitz and will combine card-collecting with real-time strategy. Players will be able to add cards to their inventory through the completion of daily challenges and naturally progressing through the game’s campaign. These cards can be used to create a deck of 12 which will be utilized in the new mode to provide benefits during battles. Blitz mode will be comprised of a wave-based co-op survival mode called Firefight and a PvP option that offers requires teams to secure capture points.

Creative Assembly insists that this mode will be “non-intimidating” and will not interfere with the play of those who wish to enjoy a pure Halo Wars experience. Are you excited for Halo Wars 2? Let us know in the comments below!