Sara Is Missing Puts Your Stalking Skills To Good Use

Sara Is Missing is an IMGA 2016 nominated thriller game that has you stalking through someone’s phone.

Sara Is Missing allows you to put your stalking skills to the test. In this incredibly clever and realistic game, you’re tasked with the finding the owner of the phone that’s now in your possession. Run through her text messages, call her friends, look through her photos and discover what has happened to Sara. 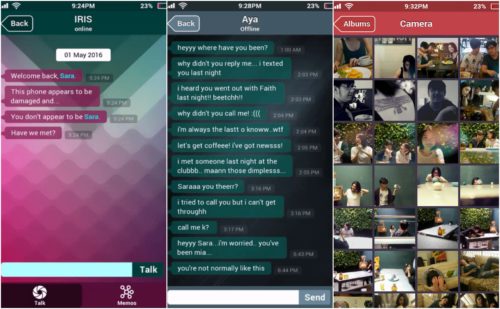 The gameplay is similar to that of Lifeline or Replica where you interact with a person to make choices that will affect the story. In this case IRIS the advanced AI of the phone has informed you that its owner may be in danger. From here you message IRIS through a text messaging app. As you sift through her data clues will be unveiled, puzzles will need to be solved as each decision brings you closer to an unexpected ending.

The quiet and almost voyeuristic nature of the game is executed seamlessly within its commendable UI. The design and functionality of the mobile device is almost too real. As you slide deeper down the rabbit hole of Sara Is Missing.

Monsoon Labs went to great lengths to make this game as realistic as possible and cast live actors and had an indie production house do most of the scripting, filming, photography and post production to ensure an immersive experience.

The game is currently in development, but a free demo is available on itch.io and Google Play. We can expect the full version to be completed in Q1 2017.